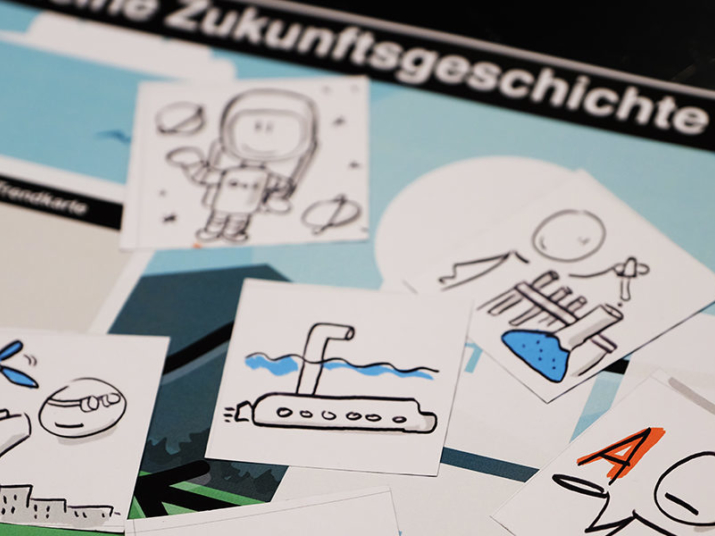 How do we think about the future? This is what Futures Studies deal with. Futurology and other areas have also developed workshop concepts where futures can be thought, touched and tested.

Nothing could be easier than envisioning the future. All it takes is a little imagination, and away you go. Of course, that is true, but there are ways to harness our imagination, focus it on certain ideas or problems to develop solutions. Futures Studies, or Futurology, investigates how people think about the future. Note that ‘futures’ is plural, whereas the German version (Zukunftsforschung) is singular. Nonetheless, German futurologists do not focus on a single future either, but on the multitude of its possibilities. Theories on the future cannot be verified – the science deals with probabilities.

Futures Studies is an interdisciplinary science. It combines approaches from a variety of areas, including computer simulations, feasibility studies, statistical forecasts, participative workshops or surveys.

“Many methods used by Futures Studies were developed in practice. For example, they were used as part of strategy processes in companies or in urban development,” says David Weigend, Head of Education and Participation at the Futurium, who is responsible for the workshop programme. “It takes a lot of creativity to envision the future, extrapolating forecasts, analyses and facts.”

The combination of analysis and imagination is revealed in a range of workshop formats that can be used for specific deliberations on the future. The formats differ depending on the target group. “Lay people focus on their own needs while experts focus on other people’s problems,” explains David Weigend.

Future workshops are one method. They were developed by futurologist Robert Jungk in the 70s. The method aims to empower citizens to plan projects for the future. A future workshop consists of three phases. The critical phase surveys current problems. The vision phase turns the problems around and dreams up an ideal future. The implementation phase plans specific future projects. For example, future workshops are used for urban planning. The residents are the actual experts here. In this way, their wishes, needs and everyday experiences can be considered in the planning process from the outset. For example, Futurium conducted a series of future workshops with citizens when planning the exhibition.

The scenario technique is another method. It uses current trends to develop future scenarios. It forms one of the methodological foundations for Futurium’s educational materials.

Weigend has the following to say about it: “In the scenario technique, we use methods from explorative and normative future studies. Explorative techniques attempt to create forecasts based on research findings and reliable knowledge. The question is: “How will we live in the future?” Normative techniques are based on people’s needs and desires. The question is then: “How do we want to live in the future?” So the scenario technique always combines facts and desires. For example, it was used in Future Lab 1.0 (a co-production with Theater an der Parkaue).

FROM DESIGN THINKING TO SPECIFIC PROTOTYPES

The Design Thinking method is not originally from Future Studies. It was developed by design firm IDEO, to solve problems from a user point of view. New products are often developed without considering people’s needs. For example this can result in complicated technical devices that are difficult to operate.

Design Thinking revolves around the users, concentrating on their wishes. Developers test ideas using prototypes. They often do things simply, for example by drawing new software on paper. Prototypes are then tested with users. The feedback helps developers understand what works well and what needs to be changed. Then more user tests are performed, the product is developed, tested again and so on.

This process reaches its limits if the idea and products are far off in the future. Domestic robots can’t simply be built as prototypes and then tested. That takes us back to our imagination. Users have to imagine what it would be like to have a domestic robot. The combination of Design Thinking and Futures Studies is a central component of the Futurium Lab – especially in the educational materials, workshops and events. It not only looks at possible futures, but also looks at how we think about futures.

Futurium’s educational materials invite users to explore the future in a playful way. The materials are based on the methodology of futures studies, as well as on education for sustainable...

It's all about ideas

Discover fresh ideas for the future in the Showcase, our interactive exhibition space in the Futurium Lab. Among other things, you can see printing robots, computers making music and artificial...