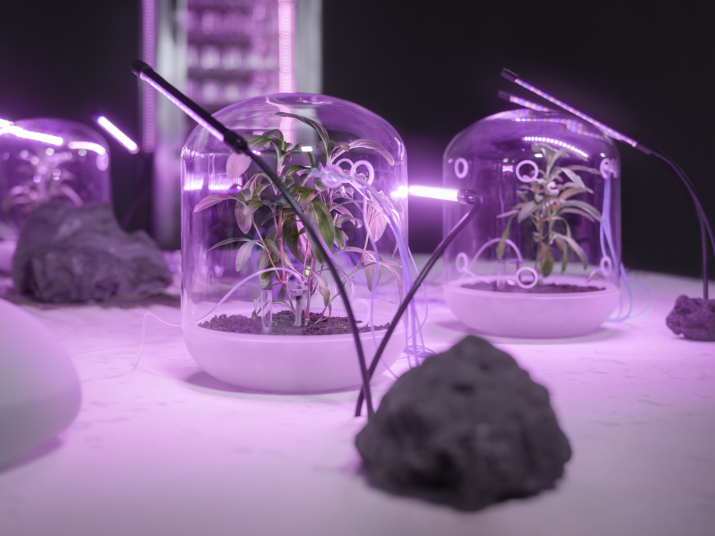 When is ‘nature’ no longer ‘natural’? How can design assist in reframing the human as not separate from or above nature, but as part of it? At what point does biology become technology? Designer and artist Johanna Schmeer uses her work to ask these questions. With her installation The Outside Inside she explores relationships between environments, the species that inhabit these, and technology. In the installation, a series of terrariums host plants, lichen, and fungi with specific terraforming abilities.

Terraforming, the design of a planet to make it earth-like, has its origins in science fiction and space science. In the books of the author Kim Stanley Robinson, for example, "fast-growing lichens" are used to make Mars habitable. But the concept also plays a role in scientific research. For example, the US military’s agency for the development of emerging technologies, DARPA, is said to be researching the use of genetically engineered organisms to make other planets habitable to humans. Terraforming is increasingly also being discussed in relation to planet Earth, especially in the context of the climate breakdown and ecological crises. For example, in the case of the Great Green Wall project in Africa, which involves planting an 8000 km long green area at the border of the Sahara Desert to create new habitats and stop desertification.

Nature has always been in a state of transformation, but the pace at which environmental conditions or climate zones are currently shifting overstrains many ecosystems. Some plants and animals are not adaptable or resilient enough to survive these changes. At the same time, many species have the ability to shape and influence their own environment – a fact that the concept of terraforming is based upon. "It is a controversial topic," explains Johanna Schmeer, "often discussed in connection with highly technologized solutions. But there are also species like certain plants, lichen, or fungi that could play a role in protecting or adapting current and future ecosystems from changing environmental conditions."

In The Outside Inside, the topic of terraforming is used as a vehicle to ask questions that arise as a result of a growing entanglement of environments, ecologies, and technology. "If human activity has inadvertently already shaped the planet so far as to constitute a new geological age, should further interventions be made to mitigate its effects and to reshape ecologies, environments, and landscapes with intent? And if so, how will the design decisions be made, and who gets to decide? Which new relationships and approaches to interspecies collaboration could replace current practices of using the natural world for exploitation and extraction?"

The central piece of the installation consists of a futuristic, sensor-equipped garden, in which plants, lichen and fungi grow in simulated possible environmental conditions of the year 2100. Three terrariums contain amaranth plants which can grow and sequester carbon dioxide in saline and dry conditions, removing a small amount of salt from the ground in the process. The second simulated environment is related to the thawing of arctic permafrost, and the idea of an insulating layer of reflective lichen to cool the soil that covers it, based on recent scientific research in vegetation-permafrost interactions. Another group of terrariums contains oyster mushrooms, which have the ability to remove heavy metals and other contaminants from their environment, preparing it for other species.

The activities of the plants, lichen, and fungi and their microecologies are tracked using capacitance, carbon dioxide, methane, and volatile organic compound sensors. The data is processed and turned into binaural beats – sounds that cause relaxing frequencies in the brain – using software developed in collaboration with sound artist Sam Conran. “In the installation, technology is not only used to simulate certain aspects of potential environmental futures and ecological interactions, but also to enable new connections and communications between humans and other species. Through the sound frequencies, the plants, lichen, and fungi can gain direct control over the human brain of the listener,” adds the designer.

When a slightly different sound frequency is played to each ear, an auditory illusion is created in the brain: We hear a third frequency that connects the two. These sounds are called binaural beats (Latin binaural: with both ears). The frequencies generated by the brain have a relaxing effect on humans. This is why binaural beats are often used for meditation.

Harvested from the interactive installation, edible amaranth flowers grown in possible future environmental conditions of the year 2100 are stored in a transparent display unit, for visitors to see and taste. By being exposed to elevated carbon dioxide levels and saline soil, the nutrient composition of these flowers is altered. Tasting the flowers allows visitors to ingest part of a possible future which directly affects their body on a molecular level.

In a film made in collaboration with designer and artist Anna-Luise Lorenz, a drone flies above three different landscapes which relate to the interactive installation’s simulated possible future environments. One is a dry and hot region adjacent to a salt lake, one is an arctic region, and one is an area with unusual soil composition, in which the ground contains high levels of iron and copper. The film speculates about a convergence of the biosphere and digital technology, in which species are augmented by a computational system that searches for and analyses new territories to inhabit and transform. It raises the question of whether hybrids of technology and ecologies that work without direct human intervention might be useful or desirable.

Speculations about possible futures exist not only in the field of design. Many scientists, filmmakers, or authors also explore alternative futures in order to find questions and solutions relevant to current and potential future problems. Increasingly, such processes are also made participatory, like in the workshops which accompanied the design process of The Outside Inside. It is worth speculating, because the future is not predetermined. It can be shaped by our present-day ideas and actions.