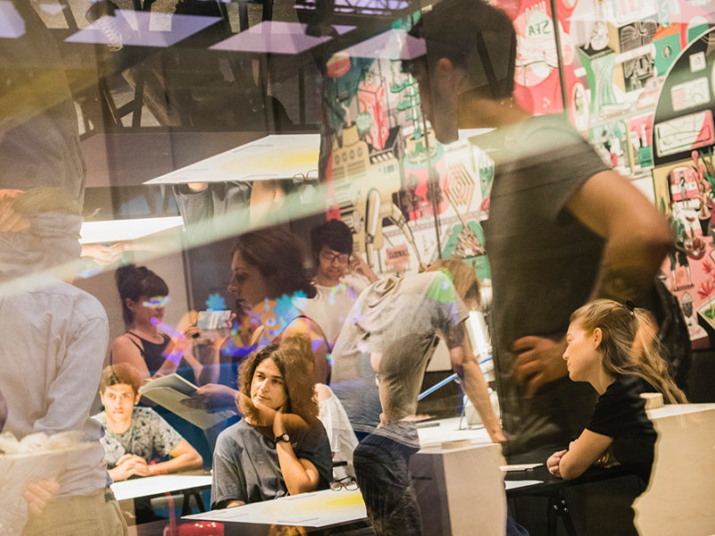 The Workshop Weeks at Futurium

Guided tours into a distant future, colourful swarms of flying “ideas-worms”, lively discussions on digitisation, sustainability and civic involvement, an entertaining Long Night of the Sciences and, above all, lots of curious and active visitors.

Guided tours into a distant future, colourful swarms of flying “ideas-worms”, lively discussions on digitisation, sustainability and civic involvement, an entertaining Long Night of the Sciences and, above all, lots of curious and active visitors: the Workshop Weeks at Futurium offered insights into the work at this house of futures and exemplified its diversity, commitment and imagination.

On the path to its final launch in spring 2019, Futurium presented itself in all its variety, while testing things out and learning a lot along the way. While temporary art installations on the upper floor represented the themed rooms of the upcoming exhibition, the Futurium Lab entered its test mode. Not only was the Showcase within the lab more or less completely set up and ready for visitors’ use, but a variety of hands-on workshops were also up and running. Participants in the Exhibit Workshops, for instance, designed initial prototypes for parts of the exhibition – such as robot types for the Robot Theatre and visions of natural worlds that could arise in the future. Those formats in particular that demanded a great deal of dedication and imagination from participants enjoyed great popularity: those coming to the Futurium are ready to discuss, fashion and actively shape the future.

“The Workshop Weeks have proven that we are on the right track. Thousands of visitors participated in our interactive formats. We met with a lot of approval for our approach of being an open house for all those interested in the future,” says Dr Stefan Brandt, Director of Futurium, summing up his impressions of the event. “We wanted to enter into an exchange of ideas with our visitors and this wish met with tremendous interest. The need among the general public to engage with us about their visions for the future, about their wishes, and also about their worries, turned out to be even greater than expected. At the same time, our visitors took advantage of the opportunity to discover the wide range of possibilities available at the Futurium.”

During the Workshop Weeks, Futurium devoted an entire day to a special topic: the climate and its protection. On this day, as on other days, it was all about visitors doing things themselves. How can I get involved and personally contribute to climate protection? This was the question that guided the day. In addition, renowned scientists gave lectures, activists offered their thoughts, and initiatives and start-ups introduced their current projects. Throughout the entire Workshop Weeks, the Urban Gardening project on Futurium forecourt invited visitors to pause to watch the bees going about their daily business or to pick up ideas for their own balconies. Things became concrete for young visitors who crafted seed balls and small fantasy animals to generate energy or to make the functioning of circuits understandable in a very entertaining way.

Berlin’s night owls crowded into the house on Friday, first for a performance by KLING KLANG KLONG that took the shape of an impressive dome of 3D sound and light, and later for the DJ set by Brandt Brauer Frick. And the Lecture Performance with Johanna Wokalek and Fabian Russ matched futuristic new sounds with a fascinating 1909 text by E.M. Forster that was far ahead of its time with its vision of a totally networked and automated world.

The Workshop Weeks came to an end with the Long Night of the Sciences, in which Futurium participated for the first time following the completion of its building. Visitors were invited, for example, to develop their own music of the future in the converted “Sound Lift”, to participate in one of the interactive performances by the theatre collective Turbo Pascal or to get involved in a Future Slam. “I thought the slam was one of the most successful formats,” says Uta Kehr, Head of Finance and Administration at the Futurium. “It was simply astonishing how people with the most diverse backgrounds came up with such exceptional ideas.” At the Future Slam, unlike traditional science slams, the presented ideas were rated in the categories “How visionary?” and “How feasible?” – and a winning project was deliberately not chosen.

As part of the Workshop Weeks, many visitors not only got to know Futurium, but also contributed to shaping it. Many an idea, and many a proposal developed in the public workshops, will flow into Futurium’s work. And all this is just the beginning, as Dr Stefan Brandt explains: “After the opening in 2019 we will interact even more closely with our visitors, be it via analogue or digital channels. We are eager to see what future-related topics concern ordinary people and what ideas they have for shaping the future. Only through this continuous exchange with our visitors can we as Futurium provide impetus for working together on creating a sustainable future. For it is our conviction that the future concerns us all.”

What will robots talk about in the future?