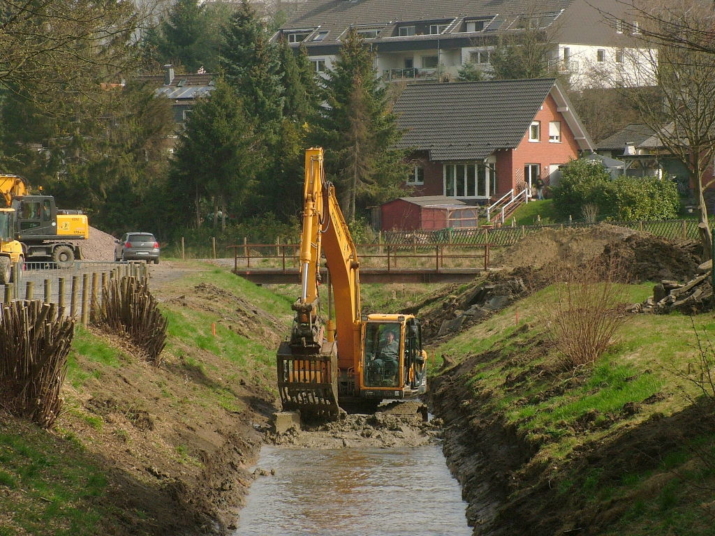 The revitalisation of rivers brings nature back into cities. One of many projects in this regard is the restoration of the River Emscher, which was once considered the most polluted river in Germany. Today, the Emscher is in the process of getting back its natural riverbed. This is a once-in-a-lifetime project that will set the standard for others of its kind, says Ilias Abawi of the Emschergenossenschaft, Germany’s oldest water management association.

MR ABAWI, WHAT MAKES THE EMSCHER RESTORATION SO SPECIAL?

Ilias Abawi: What makes the project special is that the restoration is taking place in a region that’s been shaped by more than a century of steel production and coal mining, but which is now being transformed into a business location for the service sector. We want to free the Emscher from wastewater and transform it – from a system of open streams of sewage to a place of idyllic-looking natural waters. And all of this is taking place in the midst of a densely populated landscape. After all, the Emscher region is the third largest conurbation in Europe after Paris and London.

THE PROJECT HAS BEEN ON THE GO FOR ALMOST THREE DECADES NOW. WHAT CHALLENGES HAS IT FACED SO FAR?

Abawi: The biggest challenge has been posed by the region itself, which is a densely populated conurbation. The Emscher flows for 80 kilometres through cities in the Ruhr area such as Dortmund, Bottrop and Essen. There’s little space on either side of the river. Sometimes our building machines were working only two metres away from people’s windows. Planning everything – and then implementing it in a confined space – was a great engineering achievement.

SPEAKING OF BUILDING MACHINES IN FRONT OF WINDOWS: WERE THERE ANY PROTESTS FROM RESIDENTS?

Abawi: Of course, there were some complaints. But the local population is supportive of the project. From the very beginning, we made great efforts to inform residents about everything, encouraging them to make their own suggestions, and inviting them to visit the building sites. There’s broad acceptance here, because everyone recognises the value that this project is adding to their lives.

Interview partner Ilias Abawi works for the Emschergenossenschaft, Germany’s oldest water management association. The Emscher region is the third largest conurbation in Europe after Paris and London. Its ecological conversion consists of the building of a central sewage treatment system in the Ruhr area, the construction of underground sewers, and the renaturalisation of the Emscher and its tributaries. The project started in 1992 and is scheduled to be completed by the end of 2021.

WHAT VALUE IS THAT?

Abawi: For the people of the region, the restoration of the Emscher means that in the future they’ll no longer have to put up with the smell of open sewers, parts of which flow directly past their balconies. That’s because we’re banishing the wastewater underground, while redesigning the course of the river to make it as natural as possible. This will improve people’s quality of life and make living in the Emscher region more attractive. People are looking forward to that.

APART FROM FEWER SEWAGE SMELLS, WHAT OTHER BENEFITS DOES SUCH A RIVER RENATURALISATION BRING?

Abawi: Relocating sewers underground is the first step. Then the next one is to free the river’s clean waters from their bed of concrete. We’re making everything look idyllic along the course of the river so that people enjoy being on its banks. At this point, the factor of location comes into play: after all, we want companies to settle in the region and new residential areas to be developed on the waterfront. Apart from all this, the restoration helps preserve the diversity of plant and animal species.

WHAT ABOUT FLOOD PROTECTION? DOES RIVER RESTORATION HELP HERE TOO?

Abawi: Absolutely. A renaturalised water landscape with floodplains, curves and slow flow rates contributes immensely to the improvement of flood protection. During heavy rainfall, this helps to temporarily store water masses, which can then be transported away more slowly. In this way, flooding can be avoided.

THE EMSCHER PROJECT IS CONSIDERED A SHOWCASE PROJECT. WHICH REGIONS OF THE WORLD COULD TAKE IT AS A MODEL?

Abawi: Primarily areas where coal mining is still taking place, such as South East Asia. We’ve had many delegations from countries such as Korea, Japan and China. South America might also benefit. For example, we had an exchange with colleagues who are responsible for the restoration of the Rio Bogotá in Colombia and who inquired about our experience in the construction of sewers and sewage treatment systems.

Abawi: I can imagine – against the background of current climate debates – that legislators will be insisting on river restorations that contribute significantly to better flood protection, so that there are fewer floods. This means that we’re likely to see more retention basins being built, dikes being relocated and rivers widened. In addition, ideally, the water quality will still be good enough to enable animals and plants to gain valuable habitats. In the end, river restorations must provide added value for humans and nature alike.

Read more about the project here.

ECO-FASHION FOR CITIES: FIVE REASONS FOR GREENING THE FACADES OF BUILDINGS

A LOVELY CLIMATE IN OUR CITIES: WE’RE GETTING THERE