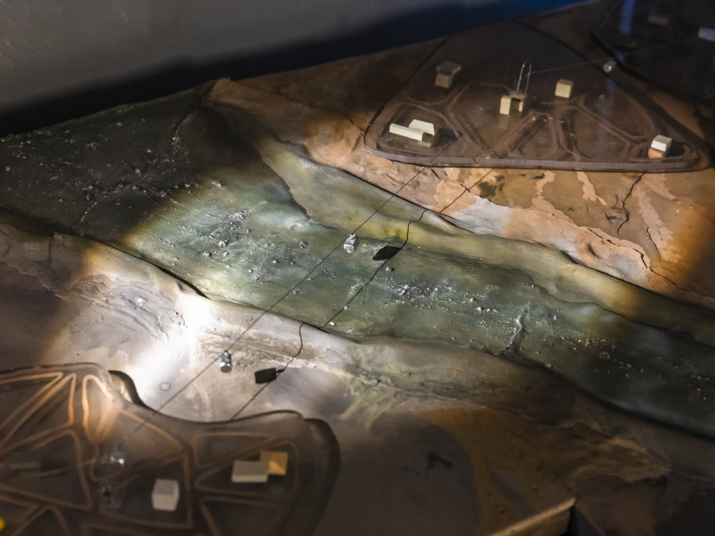 An unknown object has appeared in the government quarter – the population and officials are puzzled. Follow the live ticker from the forecourt of Futurium here!

We will report updates here.

If you want to learn more about Ava and Shevek, read here.

According to their diary, the two passengers from another company exchanged views with forest squatters.

Ava and Shevek seem to be in contact with a lawyer.

The two visitors seem to want to expand their knowledge of this world and announce a discussion with Andreas Cassee. The philosopher is an expert on the ethics of migration.

Ava and Shevek are apparently interested in the cultural and literary scholar Eva Horn. They have posted a video discussion on the Anthropocene on her blog. Horn is the author of the book Future as Catastrophe.

According to the chemists involved in the investigations, the analysis of the grey mass brings new insights: The unknown substance reacts with the carbon dioxide in the air when its outer skin is damaged and increases its visible surface by 40 percent.

First attempts to freeze the ground of the forecourt have failed. In this way, the experts hope to be able to remove the masses as a whole. Work is now underway with various research institutions to find a larger-scale solution.

Late in the evening, disappointment sets in: The hit from the missing persons file turns out to be a hoax. Ava and Shevek's identity remains unknown.

New findings on Sunday morning: According to investigators, the comparison with the missing persons file has yielded a lead. No information has yet been released to the public.

Further talks with the lawyer about Ava and Shevek bring no new insights.

Sounds from inside the vehicle continue to leak out.

A Scandinavian research team has arrived and will take samples of the grey matter in the coming days.

First of all, the representatives of the press will be admitted to the building on this Monday.

Administrative delays are also to be expected, says a Futurium spokeswoman. So far, there is no permit for the opening of the vehicle.

The technicians keep encountering difficulties in their work. Noises can be heard coming from inside.

It has emerged from the interrogation transcripts that Ava and Shevek referred to the vehicle as Common.

Even after an intensive search, Ava and Shevek remain missing, according to police.

Another attempt to remove the grey mass from the object fails.

Responsible persons of Futurium discuss the further procedure and the handling of the object on the forecourt.

The evaluation of the surveillance camera does not yield any results. What the emergency services find is yawning emptiness. Ava and Shevek have disappeared.

After no movement was heard from the vehicle for another night, the police, accompanied by a lawyer, entered the property.

The Berlin police announces: A comparison with the missing persons index has not yielded a hit.

Curious people who had already made a pilgrimage to Futurium early this morning have been disappointed: Ava and Shevek did not appear in public again after their outdoor walk on Sunday.

Meanwhile, there are new findings on the grey matter surrounding the alien object. The results are to be presented in the coming days.

Visual contact! Ava and Shevek have been sighted for the first time on the grounds of the Futurium. This is what eyewitnesses report.

Supply trucks pull up in front of the Futurium. Ava and Shevek are being supplied with food from outside.

A first interview has been conducted. However, according to the medium, the interview is not yet to be published.

Journalists have gathered on the Futurium forecourt. Ava and Shevek agree to an interview.

Although the identity of the two passengers has not yet been established, their names are Ava and Shevek. This is a result of the interviews, officials announced in the morning.

As Futurium announces, the two people will have a lawyer for asylum law at their side.

Reinforcements have arrived: The investigation of the grey matter is now being carried out under high pressure with additional scientists. The investigations are expected to continue over the weekend.

Futurium is now supplying the object with electricity from outside. The power sources seem to be defective.

The identity of the two people is still unclear.

Futurium is in direct talks with the passengers.

Futurium sends a trusted person from the house of futures to the vehicle. The doors open.

During the night, local residents heard a loud noise, which they suspect came from the vehicle. They report a kind of deflagration. It is possible that this is the energy source of the vehicle.

A special unit of the police covers the grey mass with tarpaulins.

Futurium erects a lock around die object. Access to the area is strictly controlled from now on. High hygiene standards apply.

Werner about the object: It seems to be a vehicle.

Werner speaks at a press conference and urges calm. Everything is under control. There is no danger for the population. So far there has been no contact with the people in the building. The grey mass is being examined. It cannot be removed easily.

Futurium is setting up an investigation team. The staff member and chemist Dr. Kristin Werner takes the lead.

A police spokesperson appears before the press in the morning: They are investigating in all directions.

Repeated knocking and calling in the morning do not result in contact. The evaluation of the cameras does not yield any further information either. The persons remain in the property.

Responsible employees of Futurium have decided that the persons may stay in the object for the time being.

Analysis of the exterior camera footage suggests that there are probably two people inside the property. Gender, age and identity remain unclear.

Police searches have not revealed any matches to objects reported stolen or missing.

As a preventive measure, employees of Futurium set up a security zone around the unknown object. There is still no contact. The grey mass cannot be removed either. The results of the examination of the samples are still pending.

The grey mass seems to be not removeable at the moment.

Parts of the object are covered by an unknown mass. Investigations have been initiated.

The responsible authorities have been informed.

Attempts to make contact remain unsuccessful. Neither knocking nor loud calls are answered

During the night, a strange object appeared on the forecourt of Futurium. The security service of Futurium informed staff and police in the morning. Apparently there are people inside the object. It is unclear who they are, and no contact has been made so far.