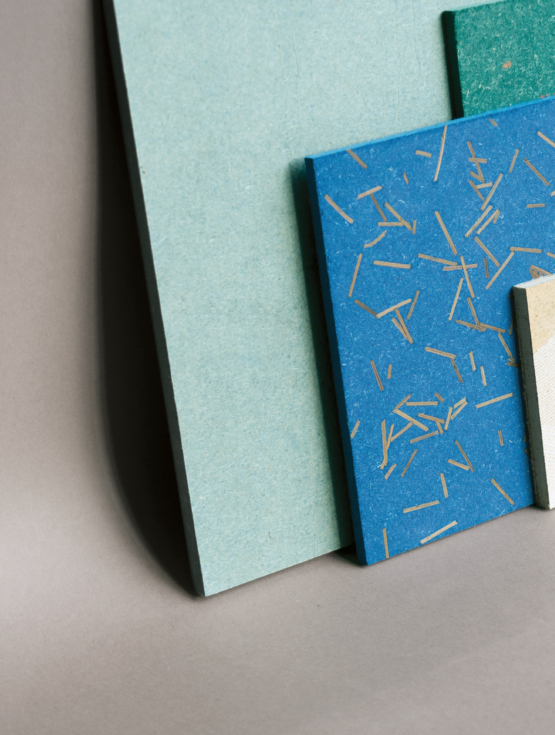 Medium-density fibreboard (MDF) – it sounds rather technical, functional and hardly attractive. Sofia Souidi shows that this need not be the case. She has reinvented MDF and renamed it “Superwood”, proving that wood processing can be more resource-efficient, eco-friendly and health-friendly too.

Sofia Souidi was born in Kassel, Germany, and graduated from the Royal College of Art in London before going on to found a design studio in Berlin in 2017. The product and material designer’s work focuses on sustainability and ranges from material research and development to the design of contemporary furniture and lighting. Superwood is the latest result of her work.

Indeed, there’s still plenty of room for improvement, as the product designer explains: “Conventional MDF panels are used in furniture making, flooring and interior finishing. It’s proved itself over time.” However, the problem is that conventional MDF is made from industrial glue that contains formaldehyde, which can damage health. “The formaldehyde from the glue in the panels continues to evaporate during the panel’s lifetime and this irritates our mucous membranes.” In addition, the formaldehyde prevents the panels from being recycled.

So, for Souidi, it was clear that the problem was the glue. And finding a solution didn’t even require a revolution: all that was needed was milk. More precisely, a protein found in milk called casein – a waste product of milk processing that, mixed with lime and other ingredients, becomes casein glue, an environmentally friendly substance that’s harmless to health and was even used by the ancient Egyptians to build furniture and boats. “The idea was to think of this glue on a larger, industrial scale. We spent three years developing the original formulation.”

“We” also includes the Fraunhofer Institute for Wood Research. It supports the development of Superwood. In the Braunschweig-based laboratories, the glue is coated with very finely chopped recycled scrap wood, which has a consistency resembling absorbent cotton. Adding natural pigments results in a fascinating interplay of colours. For the product designer, it’s exciting to be able to influence not only function but also design. “I want to make this recyclable material visible; until now, it’s only ever been traded anonymously,” says the product designer, who is continuously experimenting with the material using mixes of smaller and larger pieces of wood or adding snippets of textiles.

Then the Superwood panel slowly begins to take shape. It requires several steps to press it. The panel is formed from a loose block, and the final texture took everyone by surprise: “The stability exceeds that of conventional MDF,” says Souidi, whose Superwood project is being funded this year by the Ikea Foundation. The stability of the panel is due to its finely marbled surface. “And the glue itself is very strong too.” For this reason, Superwood can be used in many ways: in the design of furniture, in architecture, in trade-fair construction or in the making of musical instruments. The material can be pressed into shape with moulding tools and then milled, sawn, drilled and printed like conventional MDF.

So far, Sofia Souidi and her team have produced panels and three-dimensionally shaped parts. Futurium shows an exhibit made of Superwood. In our Thinking Space Nature, the black-and-blue-coloured panel blends itself into the exhibition and demonstrates very concretely how Superwood looks and feels. For the product designer, however, the environmentally friendly glue opens up completely different possibilities: “We could also use it to glue together and reuse other waste materials such as hemp, asparagus husks or flax fibres.”