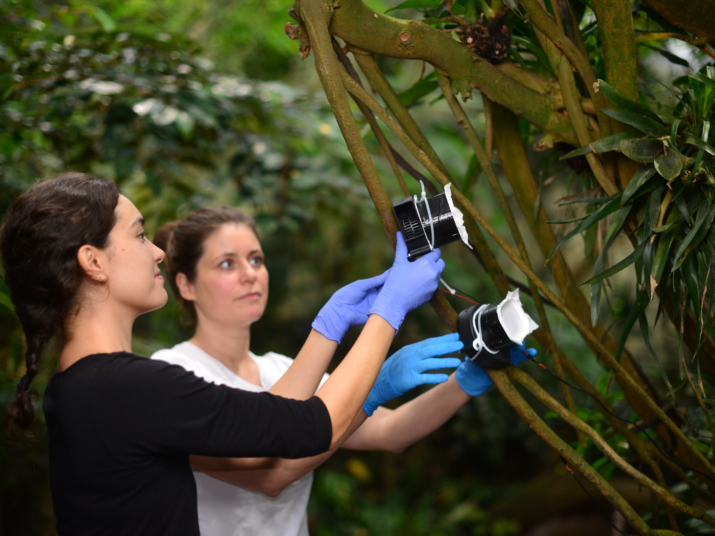 How scientists use airborne environmental DNA to monitor animals

Something’s in the Air

Air surrounds everything. So it’s no wonder that it contains lots of important information. DNA, for instance. Scientists from Denmark have now used an air sampling method to suck from the air genetic material from vertebrates. Sounds crazy, but this method might ultimately revolutionise biomonitoring, as the Danish researcher Christina Lynggaard explains in this interview with Futurium Online Editor Ludmilla Ostermann.

How does air sampling work?

Christina Lynggaard: It works a bit like vacuum cleaning. It depends on the device you use. In our experiment, we used two different methods. In the first setup, we used a commercial vacuum cleaner with a water chamber. The air is sucked in and passes through the water, whereby all particles remain in the water and the air comes out clean. People use this method for cleaning their homes. In the second setup, we used small blower fans, such as those used for cooling down computers. We 3D-printed a cube-shaped housing unit that we put on top of the blower fan to hold the filter. All the particles stayed inside this filter, which was fine enough to be used in air conditioning systems.

You and your team used this air sampling method at Copenhagen Zoo. What did you find?

Lynggaard: We were able to detect particles from 49 vertebrate species – mammals and birds, fish and amphibia, and even one reptile species.

What surprised you the most?

Lynggaard: First of all, that the method worked in the first place. We didn’t think it was going to work. The backstory is that my boss got a grant from a foundation that provides funds for crazy ideas – ideas that in all likelihood will either fail to work properly or fail altogether. But if they do work, they might end up revolutionising their field. We were surprised that we were able to detect particles from very large animals, like giraffes and rhinos, but also from very small ones, such as different kinds of mice and even a toad. We also detected fish particles in the air and asked ourselves why we had been able to find the DNA of a guppy in the air of the rainforest house. There you’ve got ponds containing many guppies. But then there’s also a waterfall that might have splashed the guppy DNA into the air. In our case, the fish was food for some of the zoo’s other animals.

Which new possibilities and opportunities does air sampling offer science?

Lynggaard: The method is just in its early stages, but eventually it will enable us to monitor animals in a non-invasive way. We’ll no longer need to see an animal live to be able to record it. It will be sufficient to trace its particles in the air. Detecting vertebrates has been a challenge because there’s so much environmental DNA on the ground. Researchers have been using samples of soil for this purpose. However, you need the animal to step onto the soil you’re sampling. Or let’s take water: the animal needs to have contact with the water – for instance, by going into the water or by drinking it from a lake or a river. Then you can collect the water and trace the DNA. But what if the animal doesn’t drink?

Could this method serve to find species that are thought to be extinct?

Lynggaard: I believe it’s entirely possible. However, only if these animals that are thought to be extinct aren’t actually extinct. They might just be extremely shy, or the number of individuals left might be very small. That would make them very difficult to monitor. Sometimes, camera traps alone haven’t been enough to prove their presence in a certain area. So, we hope that air sampling will be able to help us detect these species better.

What can air sampling contribute to our fight against pandemics?

Lynggaard: Air sampling has already been used for detecting viruses and bacteria in the air. Now that we’ve shown that we’re able to detect particles of vertebrates in the air, it could be easier to monitor animals that are carrying the diseases. In theory, we could use the same filter to detect the presence of both the pathogen and the animals in the vicinity of where this pathogen was collected. In this way, it would be easier to identify a pathogen and determine the animal carrying the pathogen. This is how I imagine it could work in the future.

Which challenges have you come across when using air sampling?

Lynggaard: We’ve had to deal with quite a few challenges. Wind, for example: it scatters all the particles and DNA. We’ve come to the conclusion that our results are likely to be different when we sample in a very open area where it’s constantly windy. In such a case we’d assume we’re not only detecting animals in the direct vicinity but also ones from further away – because the wind might have carried this DNA to the sampling location. Whereas if we sample in a more or less closed area – like a forest or a cave – we’re more likely to detect only animals that are directly in that area.
Another challenge is that we’re not aware of the extent to which different species shed their DNA. Some species definitely release more DNA than others. That could be one of the reasons why we’ve detected more DNA from certain types of species than from others. There might even be differences between individuals of the same species: some animals clean or scratch themselves more frequently due to itching, which, in turn, causes them to release more DNA than other individuals of their species.
A further challenge is DNA degradation: as soon as the DNA is released into the environment – where it’s affected by rain, sun or oxygen – it starts to degrade. We don’t know how exactly airborne DNA behaves – whether the DNA is attached to a particle and protected from degrading by the latter, or whether the DNA floats freely in the air, in which case it would degrade more easily. If we were to find that the DNA degrades very fast, then we wouldn’t be able to detect animals that had been in the area three days earlier.
And last but not least, there’s the issue of how to process DNA in the lab. In the field, we collect air inside a container and close it. Back in the lab, we open the container and the air from the lab mingles with our air sample. That’s why we need to make sure we know what’s in our labs’ air. So if we find weird DNA in our sample, we’ll at least be able to trace it back.

Is air sampling a method regularly used in research?

Lynggaard: So far, it hasn’t been used to detect terrestrial vertebrates. But researchers have been using air sampling to detect the presence of viruses or bacteria. There are small devices you can carry on your lab coat, and while you’re walking around a hospital, you’re gathering air samples. Air sampling has also been used to monitor the paths of pollen from plants and fungal spores as they’re carried along by the wind. And, of course, people use air to measure the pollution in different areas in the city and relate it to workers’ health.

What are the next steps? How will air sampling develop?

Lynggaard: The next big step is to take air sampling out into nature. We successfully put the method to the test in the zoo, but that’s a very controlled environment where you have many animals living in the same restricted area over many years. It’s a nice proof of concept, but now we need to figure out whether the method can be applied in an open space. In addition, the method needs some fine-tuning. Not only with regard to the way we catch DNA in the air, but also when it comes to the lab protocols we use. We could modify some of the protocols in order to obtain more DNA from our filters than we’re getting right now. There’s a lot of work ahead of us.