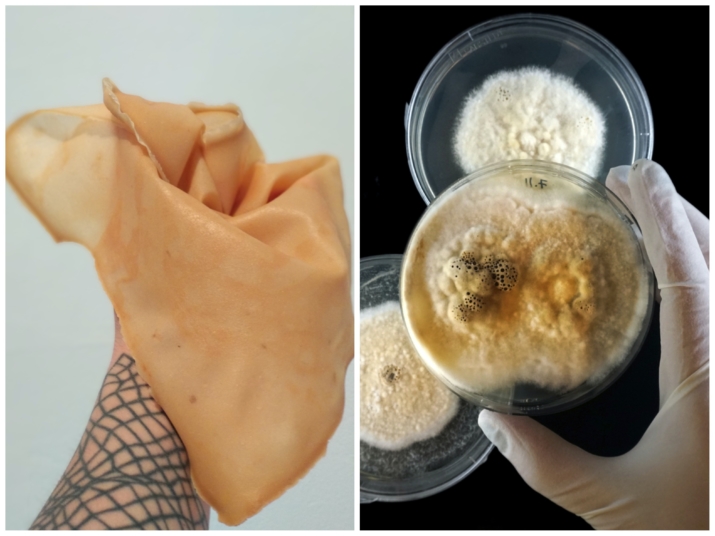 The Wonderful World of Mushrooms

How do fungi react to sound? And which new biomaterials can be developed through the symbiosis of algae and fungi? Theresa Schubert and Fara Peluso have been getting to the bottom of these questions. Their exhibits will be on display in the Futurium Lab from 3 July. The artists-in-residence programme is using the project Mind the Fungi to bring art and design together with the latest biotechnological research being conducted at TU Berlin.

For artist Theresa Schubert, fungi provide the perfect basis for creating network metaphors – not only in an aesthetic sense, but also as a philosophy of relationships, processes and space. For her Box Experiment she has built boxes that contain loudspeakers and a selection of fungal mycelia collected during her excursions into the forest. For several weeks, she exposed the fungi to specific sound frequencies. Schubert was delighted to see that this had an effect on the growth and metabolism of the mycelia. In the next step, she developed the interactive video installation Sound for Fungi. Homage to Indeterminacy, which simulates fungal hyphae (filamentous cells) and enables interaction via a hand-tracking sensor. “Surprising as it may sound, until now no one has ever studied the influence of sounds on fungal growth,” says the artist. Futurium visitors can even act as generators of sound frequencies in this exhibit, thereby modulating the growth of the hyphae and facilitating movement through the network.

Artist and designer Fara Peluso works in the fields of material-driven design and bioart. She perceives humans to be in a close relationship to nature, organisms and biological processes. Her work Niche is a hybrid installation of a living sculpture that explores the coexistence between fungi and algae as microorganisms. Peluso is inspired by the symbiotic relationship between these organisms in lichens and her work blends nature, biotechnology and art. The sculpture Zweisamkeit (“Togetherness”) combines a topography of oak wood with several layers of biofilm, which she understands as a form of metamorphosis. “My work intends to raise critical questions regarding the current relationship between human and nature, while pointing out new possibilities of connection to living organisms,” explains Peluso. To this end, she reflects on the influence humans have had on landscapes. Her focus in this regard is on how we have defined and shaped our natural environment – but also how we ourselves are being shaped by biological forces in the environment.

In addition to the works by Schubert and Peluso, the exhibition curated by Regine Rapp and Christian de Lutz (Art Laboratory Berlin) presents the results of the latest research being carried out in the laboratories of Technische Universität Berlin’s Institute of Biotechnology. The Department of Applied and Molecular Microbiology, for example, will be showcasing Bastian Schubert’s prototype of a bicycle helmet made of fungal composite, while the Department of Bioprocess Engineering will enable visitors to closely observe organisms living in symbiosis in lichens. Last but not least, a film documentary will introduce the interdisciplinary project Mind the Fungi and the team behind it.

Mind the Fungi (2018–2020) is a cooperation between TU Berlin’s Institute of Biotechnology and Art Laboratory Berlin. Microbiologists and bioprocess engineers are investigating local polypores (that is, fungi growing on trees) and lichens. The focus is on the development of new ideas and technologies with a view to developing innovative materials from fungi and lichens: biomaterials from fungi can provide sustainable alternatives for construction and packaging materials and even replace leather. Lichens produce valuable materials too, even though they grow very slowly in nature. Regine Rapp and Christian de Lutz from Art Laboratory Berlin have been bridging the gap between science, art, design and the public sphere through various citizen science formats and two exhibitions at Futurium. The works of Schubert and Peluso are the result of close collaboration with two subject areas – Applied and Molecular Microbiology headed by Professor Vera Meyer and Bioprocess Engineering headed by Professor Peter Neubauer – and were supervised by Art Laboratory Berlin.