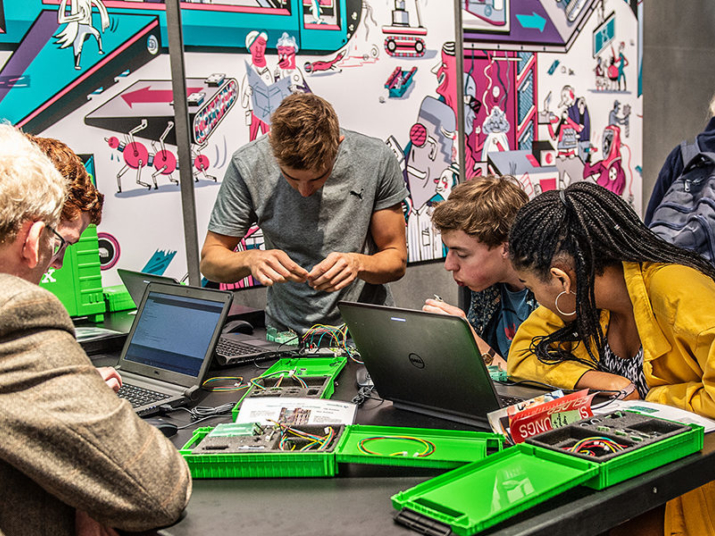 Futurium will start its first long-term citizen science project by setting up a netword of senseBoxes. In several workshops participants will be introduced to working with the open source weather stations.

Berlin’s air is so famous that it has even been memorialised in a popular song. But is the air in Berlin really that good? Around 50 citizen scientists will soon be able to find out for themselves by measuring it in their own homes. Futurium is about to start its first long-term citizen science project in cooperation with the creators of the do-it-yourself weather station kit, senseBox. This open source weather station can be easily assembled and programmed to measure different values such as humidity, temperature or levels of fine dust.

In order to record all these values, special sensors are connected to the senseBoxes. As part of Futurium project, two new sensors will be launched: one for measuring nitrogen oxide values and one for ozone. However, these new sensors also make the handling of the senseBox somewhat trickier. For this reason, Thomas Bartoschek and members of the team of his that developed the senseBox at the University of Münster are coming to help set it up. During the course of several workshops, they will introduce participants to the project itself and to the handling of the boxes. Fourteen of the participants will be demonstrated the workings of the new sensors. Futurium itself will also have a senseBox placed on its roof; this will measure wind and rain too.

The measured values of all senseBoxes will then be fed into the openSenseMap, where they will be made available as open data to all those who wish to inform themselves or to use the data for their own research projects. “Fine dust pollution in cities, the exhaust gas scandal and environmental protection in general are topics that many people care about, but for whom too little data is available,” says Thomas Bartoschek. “The City of Münster, for example, has only two official measuring stations, one on a big street, the other in a residential area.” The senseBoxes facilitate the more extensive coverage of Germany with measuring stations; and the values they record can serve as a valuable addition to official data.

For example, a geographer from Bayreuth analysed the fine dust data recorded by all senseBoxes and searched for temporal peaks. What stood out in particular was New Year’s Eve. This was hardly astonishing, but the fact that the fine dust was still in the air a few days later came as quite a surprise. A student has in turn developed an algorithm that recommends where best to place senseBoxes in order to get especially efficient measurements. Futurium will distribute its senseBoxes based on this model, provided that this is compatible with the participants and where they live. Ordinary citizens can simply consult the openSenseMap to discover what the air quality is like in their street, on their jogging route or in a prospective neighbourhood.

With less than a year to go before the opening of Futurium, the senseBoxes will begin to measure the air quality at participants’ homes and to collect values diligently. When Futurium officially opens in September 2019, the network of Futurium senseBoxes will provide the data for an interactive installation in the Futurium Lab. Data will be incorporated in real time to display the current air quality on a topographical map of Berlin. In combination with events and educational materials, the senseBox will become an integral part of the Futurium Lab programme until 2020 and perhaps beyond.