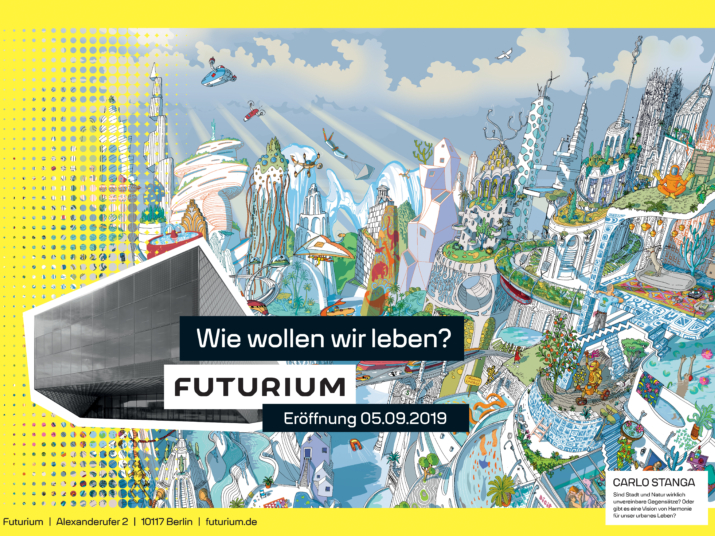 This is how artists envision the future

Futures designed on a drawing board

What will our lives be like in future? For many years, this question has been moving people to create documents, films, paintings and art works, which bear witness to our fascination with the future. Futurium’s opening campaign focuses its communications on the visual aspect. Berlin-based ad agency Scholz & Friends is behind the idea.

Artists were invited to put their personal visions for the future on paper. Their brief was “How do we want to live?” – at Futurium, everything revolves around this question.

“We wanted possibilities, not predictions or dystopias,” explains Jörg Waschescio, Creative Director at Scholz & Friends. “This special campaign structure gave rise to a dynamic impression of our world for tomorrow and beyond, with varied and occasionally contradictory perspectives.”

This was a special challenge for the illustrators, who each responded in their own style: “The feedback was extremely positive; the artists loved the challenge,” says Waschescio. There were no limitations, as “the best and most varied work results from the maximum level of artistic freedom.”

That made choosing the final visuals particularly difficult. They depict a wide variety of futures and illustrative styles. While design agency Rocket & Wink from Hamburg envisioned a fusion of humans, nature and technology based on da Vinci’s famous ‘Vitruvian Man’, Katrin Rodegast chose a silhouette to portray her dream of a green future with urban gardening. “The aim of the campaign was to paint as broad and diverse a picture of the future as possible,” explains the Creative Director. This includes perspectives that span national borders, which is why international artists – from the Netherlands, Sweden, France and Great Britain – also provided creative input.

Futurium’s opening campaign consists of ten images. From August on, they will be on display throughout Berlin and in other German cities. However, the campaign will focus on the capital. “We want to turn Berlin into a gallery of future visions,” explains Waschescio. The campaign will also be brought to life in cinema and radio, and published in newspapers, magazines and social media.