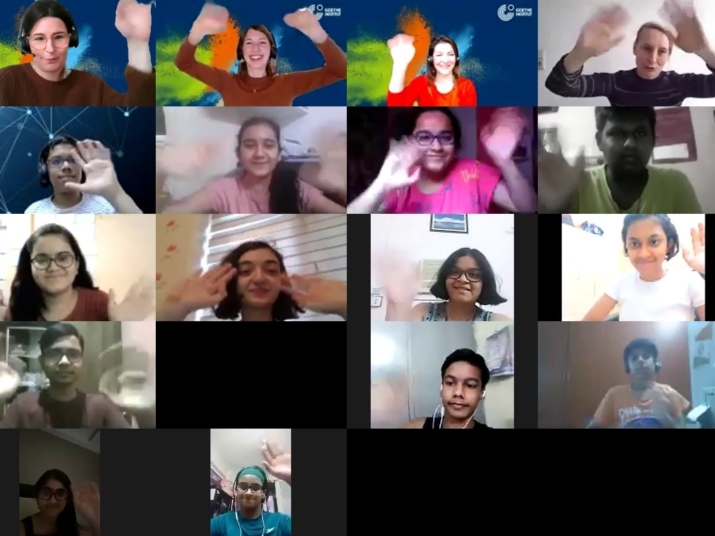 How schoolchildren from Bangladesh, India, Iran and Pakistan see their future – Future Box Workshop in cooperation with the PASCH Initiative for partner schools

A Pharmacist with Seven Cats

“Thirty years from now, I see myself living in a house with green walls; I’ll have seven cats; I’ll be working as a pharmacist in a big company; and I’ll be travelling a lot.” This very concrete vision of the future was created with the help of Futurium’s Future Boxes. Schoolchildren from Bangladesh, India, Iran and Pakistan tried them out in a workshop organised by the Goethe-Institut’s Visitors Programme on behalf of the German Foreign Office’s PASCH Initiative (Schools: Partners of the Future). The workshop took place within the framework of a digital camp for schoolchildren on the subject of the dual education system in Germany.

The Visitors Programme of the Goethe-Institut organises information trips for guests from all over the world on behalf of Germany’s Foreign Office and other institutions. The programme’s participants include politicians, scientists, journalists and other disseminators of ideas. The topics of the trips range from the dual education system to law and economics to art and culture. Every year, the Visitors Programme offers more than 1,200 guests the opportunity to come into contact with other international experts and discussion partners through individual, tailor-made information trips.

The PASCHInitiative connects more than 2,000 schools with more than 600,000 pupils in 120 countries. It is an initiative of Germany’s Foreign Office in cooperation with the Central Agency for German Schools Abroad(ZfA), the Goethe-Institut, the German Academic Exchange Service (DAAD) and the Pedagogical Exchange Service (PAD) of the Secretariat of the Standing Conference of the Ministers of Education and Cultural Affairs of the Länder in the Federal Republic of Germany (Kultusministerkonferenz).

Five colourful Future Boxes on different subjects are part of Futurium’s educational materials. Until now, they have only been available in German as boxes or for download. For the PASCH programme, the team at our House of Futures translated two editions into English. “And it works,” says Futurium education department member Antonia Kapretz, who led the workshop. With the Future Box on the topic of work, schoolchildren from South Asia aged between 12 to 18 created their personal visions of the future.

And the results are as versatile as the schoolchildren themselves: “The realisation of professional dreams, travelling – even into space – family and, above all, friends play a major role,” says Miria Neugebauer, programme coordinator at the Goethe-Institut’s Visitors Programme. “Equally important are social aspects such as improving the quality of life for people in their home countries, and fighting poverty and inequality.” The home countries of the workshop participants mostly appear in the news in connection with wars and conflicts. The schoolchildren participating in the PASCH project are determined not to let this be part of their own future. On the contrary: one of the girls hopes to become a children’s dentist working for Doctors Without Borders to help provide access to healthcare for everyone. A boy from India gave a fiery speech in favour of equal pay for women and men. “I got goosebumps listening to these young people describing their visions of the future,” says Antonia Kapretz.

The Future Boxes stimulate the imagination. Used in larger groups, they quickly bring all participants onto the same level of knowledge on the themes of cities, nutrition, energy, work and health.

Simple questions serve the purpose of laying out the subjects’ different facets. The Future Box Work, for instance, asks: “Who will be doing the work in the future? Humans? Humans and machines? Cyborgs?” Questions like these inform the participants about the current state of things, while encouraging them to think independently and formulate their own visions.

Antonia Kapretz explains why this skill – namely, that of reading the future – is important for everyone: “The future doesn’t exist until I think about it. Only then can I take steps to achieve this future. Without imagining what could be, I cannot become part of my own future.” Miria Neugebauer explains that the PASCH Initiative wants to turn young people into active creators, adding: “In their home countries and across borders. For many pupils from PASCH schools, the thought of studying or working in Germany is a great motivation for the future.”

Another result of playing with the Future Box is the realisation that work, and everything connected to it, is by no means viewed in the same way in different countries. While the model of co-working spaces has been gaining in importance in Germany, the workshop participants from South Asia tended to view this concept negatively, says Antonia Kapretz. “Family businesses, which are viewed positively in our country, are less desirable workplaces in other countries. The PASCH pupils tend to imagine their own futures in the offices of major companies.” Kapretz is pleased that the Future Boxes are able to point to cultural differences too. At the beginning, the participants were a little sceptical: “But, for all of them, their initial ‘Eh, it’s only a bunch of cards’ quickly turned into ‘Oh, I’ve got a vision for the future’.”

Find out more about Futurium’s Future Boxes here. Try them out and order them here.