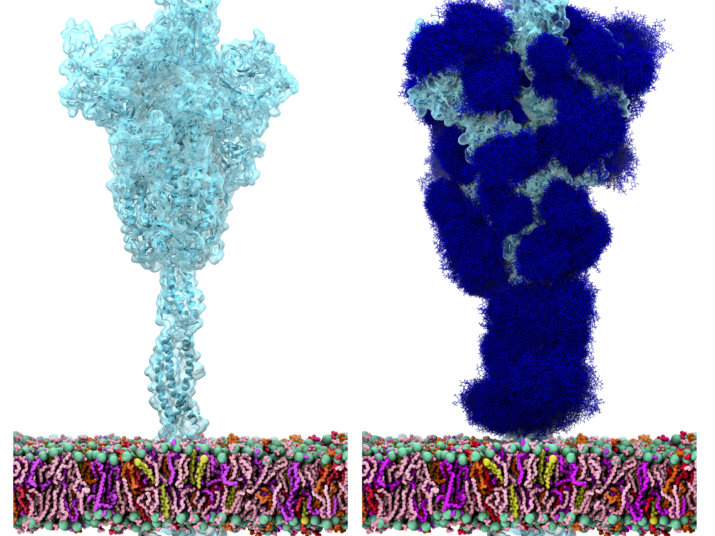 Digital research is becoming increasingly important. We talked to two scientists about what can be achieved with computers in research – and how they can already help us with the Corona pandemic today.

It is impossible to imagine science without computers anymore. And it is no longer just computer scientists who are sitting in front of the screens. This is particularly evident in the current research on the corona pandemic. Using computers, economists calculate optimal supply chains for protective masks and medicines, epidemiologists simulate future scenarios with and without corona measures in place and physicians and chemists determine what possible vaccines and medicines have to look like in order to be effective.

One of these chemists is Rommie Amaro. She and her team in Texas use one of the largest and most powerful computers in the world – a so-called supercomputer. It is called Frontera and works just like the computers we know from our everyday life. What makes it a supercomputer is its size: Instead of fitting into a backpack like a laptop, Frontera occupies an entire building.

Rommie Amaro and her colleagues are working on a project that is unique in the world with the aim of creating a digital model of the corona virus SARS-CoV-2 on the computer. Using this digital corona virus, researchers can carry out experiments in complete safety and without having to get geared up in full-body protective suits. And that’s not the only advantage: "We can watch and see how all the virus atoms move," explains Rommie Amaro. "I like to call our software a 'computer microscope'. With our computer you can see things that would remain invisible in normal experiments." In this way the scientists want to learn to understand how the virus behaves in our bodies.

We can watch and see how all the virus atoms move.

Right now, the San Diego research team is recreating the virus on the computer. This is a huge task, because a total of 200 million atoms must be arranged to find their proper place. If everything goes according to plan, the project should be ready to go next month. Then the huge computer model of the virus will be ready for use. Rommie Amaro and her team will use supercomputers to calculate how the virus attacks human cells.

This process takes only a few milliseconds in real life, about as long as a photo flash. Since millions of atoms are in motion during this minuscule period of time, the supercomputer will need several weeks or even months to calculate the process. But it's worth the wait: As a result, the scientists will receive a kind of movie that shows exactly how the virus moves and where its weak points lie. This information is important for developing and advancing tailor-made drugs and vaccines.

With the progressive development of computationally powerful computers, simulations such as these will become much more important in the future than they already are today. But what about the computers themselves? Will they work quite differently in the future?

What are quantum computers?

Quantum computers consist of minute computing units called qubits. Because they are so small, they work according to the very unusual rules of quantum mechanics. In the world of qubits, for example, there are no more absolute truths. Instead, there are only probabilities. While in our everyday world it is quite clear whether a person has already crossed a street, for example, or is still waiting at the traffic lights, in the world of quanta this can no longer be determined. A tiny little qubit, unlike the person on the street, is in one state with a certain probability, and at the same time in another state with a certain probability. Quantum researchers call this superposition. If this superposition is cleverly exploited in calculations, quantum computers could be faster than classical computers in the future. However, how this superposition precisely works hasn’t been completely studied yet.

For some years now, research is being conducted on a new form of computer, the quantum computers. They are made up of tiny particles that are so small that the physical rules of our everyday world no longer apply to them. Instead, they function according to the rules of quantum mechanics, which give them special properties. Developers are hoping that quantum computers will be able to work much faster than the most powerful supercomputers thanks to their special properties. But is that true?

Dominik Hangleiter is a physicist and conducts research on quantum computers at the Free University of Berlin. "For certain problems, quantum computers could be much better than classical computers," he explains. This was proven for the first time in an experiment last year. This represents a milestone in research – even if it involved a very specific theoretical computational problem for which there is no concrete application as yet.

One of the major challenges now, is to find meaningful practical applications for quantum computers explains Dominik Hangleiter. And there is still a lot of work to be done in building the computers. So far, only a few quantum computer prototypes exist worldwide. In the future, they are to become much larger and thus more powerful than they are today.

Even though many questions remain unanswered with regard to quantum computers, they offer exciting prospects for the future. This for example applies to computational tasks similar to that of Rommie Amaro, where the behaviour of small particles such as electrons or molecules is to be predicted. This is because these particles are so small that they themselves possess quantum properties. While Rommie Amaro's supercomputer first has to simulate these properties laboriously using many calculation steps, a quantum computer could understand them intuitively and come to a result very quickly.

For certain problems, quantum computers could be much better than classical computers.

Which direction are we heading in?

In order to do the immense and complex calculations that Rommie Amaro conducts on a quantum computer, they first have to become much more powerful than they are today. Nevertheless, Dominik Hangleiter is optimistic that this could be with a little luck during the development phase – possible in a few years or decades.

And Rommie Amaro sees a bright future ahead whether with or without quantum computers: "When people think of scientists, they think of lab coats, lab goggles, glass flasks and Bunsen burners, but there's this whole world of computers and theory out there, and it's becoming more and more powerful. How this will turn out – whether we will find new vaccines in the future using intelligent supercomputers or whether we will learn programming again from scratch on quantum computers – is not yet certain. What is certain, on the other hand, is that more and more research will be carried out on our computers in the future.

Everyone can provide their own computer at home in a decentralised network. While you are reading e-mails or watching videos and do not need all the computing power yourself, your laptop is doing research on how cancer cells behave or how Alzheimer's can be treated. For more information on how you can participate, please see here.

Computer simulations have become indispensable in research. Nevertheless, not all scientists have access to supercomputers with high computing power. But in order to be able to conduct research, some of them use decentralized networks. A network like this connects thousands of small computers to each other and together possess real computing power.

Cover photo: The proteins that decorate the corona virus like prongs could be a potential target for a COVID-19 drug. In order to understand how drugs can render the virus harmless, Rommie Amaro and her team are studying the movements of the virus on the supercomputer. Credit: Lorenzo Casalino, Zied Gaieb, Rommie Amaro, UC San Diego.

The Wonderful World of Mushrooms

DEAR FRIDAYS FOR FUTURE, IS THE CORONA CRISIS THE CLIMATE SAVER?

Learn more about our future-makers and their work

The exhibits before your eyes in the Futurium Lab were created by future-makers from around the globe. We’ve compiled some interesting facts here about these people and their work – so read,...

Ever conducted an orchestra? Or improvised with a professional pianist? kling klang klong’s three stations at the Futurium Lab give everyone a smart head start. Even those who’ve never touched...