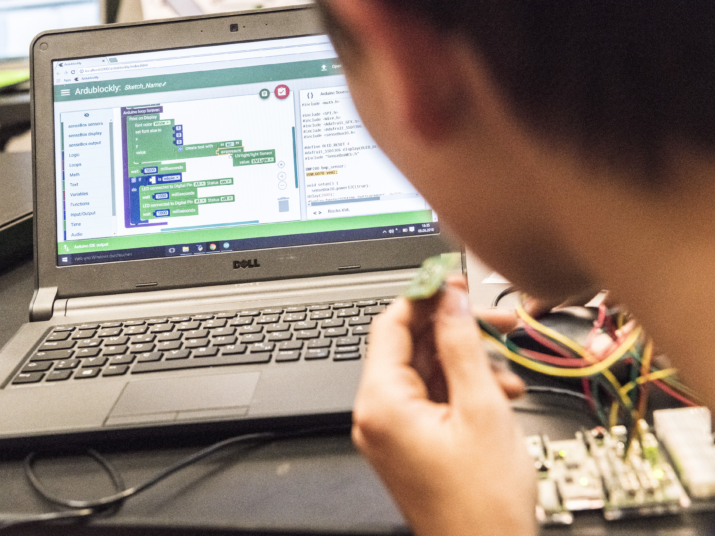 Everywhere around the globe, scientists research important phenomena to better understand the world around us. The larger the project is, the more critical eyes and helping hands are needed. Thomas Bartoschek and his team want us all to get involved: their ‘DIY kit for environmental sensor stations’ is designed so that anyone can use it.

“In a way, our senseBox is like a minicomputer where you can attach many different environmental sensors,” the geoscientist explains. “It can measure weather phenomena such as temperature, humidity or air pressure; light phenomena like illuminance and UV radiation; and air quality markers like particulate pollution and nitrous oxides. The senseBox is easy to set up in a garden, on a balcony, or on the rooftop, and automatically transmits its measurements to the Internet.”

Taking the Future into Our Own Hands

To ensure that anyone can join the fun, the kit is extremely easy to assemble and modular by design. Users can decide for themselves which parts and sensors they want. All measurements are automatically transmitted to a digital map where the data is free for anyone to view, analyse, or use. This is important because larger data samples from different locations make it easier to plan reliable concepts for environmental protection or air quality.

Bartoschek attributes this to the system’s deliberate openness. “We consciously designed our openSenseMap to allow other devices to connect to it and transmit their own data, even when they measure what we don’t measure ourselves. We are getting a lot of particulate measurements from Stuttgart‘s Luftdaten project and the EU project HackAir, for example. The resulting data are freely accessible by climatologists researching urban climate, and also by app developers and journalists reporting on local environmental issues.“

In Berlin, Futurium has collaborated with citizens to set up 50 senseBox stations, including the one on its own roof. Futurium’s senseBox contains additional sensors for wind and precipitation. The collected data is displayed on an interactive relief map, allowing visitors to glimpse the city’s air quality in real time. “Berlin’s data primarily come from the senseBoxes the Futurium distributed to interested citizens,” adds Bartoschek. “Here, you can see first-hand how Berlin’s temperature or particulate levels change with factors during rush hour, fireplace activity, or (during) day and night. Workshops teach people how to get the most out of this versatile box and how to get themselves involved. The latter is especially important for the future of our cities. Good urban planning relies on citizens collecting data in their own neighbourhoods to answer important questions: Where do we need a speed limit? Is it worth banning diesel cars? Where is it hard to breathe and why?”

Back in the early 20th century, Activist and Journalist Robert Jung started the so-called future workshops to involve citizens in planning processes. His creative planning ‘from below’ gave rise to today’s Citizen Science, which encourages interested laypeople to get involved in science without the need for expert knowledge. Whether they count insects, compare images, or take pictures of gravestones, the tasks carried out by citizen scientists significantly boost research. History especially benefits from this grassroots support since many old sources would simply turn obsolete in the archives without plenty of help from enthusiastic students, retirees, and part-time historians. Citizen Science allows people to use their own strengths and interests to support a good cause and experience the impact of the Wisdom of Crowds.

The Future Concerns Us All

When we take measurements at our own doorstep, issues such as air pollution, ozone load, and the climate crisis become a lot more tangible. The senseBox encourages us to get involved and has even inspired some to develop their own tweaks for the project. “One student came up with an algorithm for the perfect distribution and placement of new senseBoxes to make our measurements even more efficient,” Bartoschek beams.

At the same time, we need to bring science out of its ivory tower. Global problems like climate change require society, politics, and science to work together. That’s where Citizen Science can make a difference. To have a say in our shared future, we need to get involved, and taking measurements that improve the traffic and urban planning in our own cities is a good place to start.