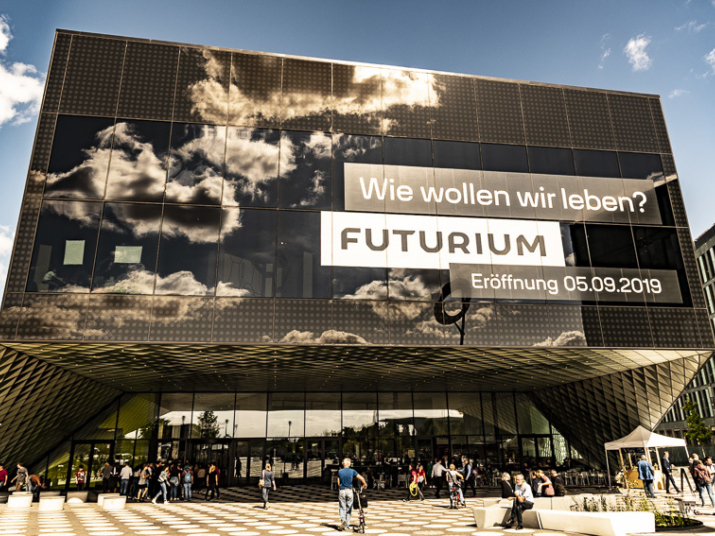 Welcoming the Future with almost 30,000 Guests

Futurium celebrated its opening with a major ‘Futures Festival’ from 5 to 8 September. Almost 30,000 guests accepted the invitation to join in. Among them were astronaut Dr Alexander Gerst, the Head of the Federal Chancellery Professor Dr Helge Braun, and Federal Minister of Education and Research Anja Karliczek. As of now, the house of futures with its exhibition, Forum and Futurium Lab is open to visitors. Admission is free.

Futurium spent the weekend celebrating its opening. Almost 30,000 visitors came to celebrate with us and turned the site at Kapelle-Ufer into a happy sea of faces intent on discovering the future.

For the first time, visitors could explore the exhibition of the future in the three thinking spaces Human, Nature and Technology. The Futurium Lab invited everyone to try out, and tinker with, interactive exhibits and experiments, while different activity islands encouraged visitors to test Futurium’s range of educational offerings.

The multi-faceted opening programme comprised scientific stimuli and workshops, as well as hands-on interactive points, games and music. The opening discussion titled “Tomorrow begins today. Why it is important to take an interest in the future” took place with the participation of eyewitness to history and Holocaust survivor Margot Friedländer, technology-assessment specialist Professor Dr Armin Grunwald, and Extinction Rebellion activist Cléo Mieulet.

Harvard Professor Sheila Jasanoff discussed visions of 21st-century science with Astronomer Royal Sir Martin Rees. Other speakers presented their concrete visions of utopia titled, for instance, “In the future, human and machine will have become one” or “In the future, animals will have civil rights”. The Scandinavian electro-band WhoMadeWho made sure everyone was entertained.

It is our vision to make Futurium a place for everyone – a venue that is open, imaginative and close to people’s real lives.

Dr Stefan Brandt, the Director of Futurium, says: “We are absolutely delighted with the tremendous encouragement we received from our visitors. Despite long queues at the entrance, the mood remained positive throughout. It was overwhelming to be there to experience how many of our guests took up our invitation full of curiosity and threw themselves into the future – in a playful manner, in discussions, or in hands-on activities. I hope that many of these visitors will come back to discover our house of futures step by step. After all, it is our vision to make Futurium a place for everyone – a venue that is open, imaginative and close to people’s real lives.

The House of Futures became alive with its visitors.

Nicole Schneider, Commercial Managing Director: “The House of Futures became alive with its visitors. I am particularly pleased about the good organisation and the smooth running of our Futures Festival. The cooperation of the Futurium team with all its partners was very harmonious."