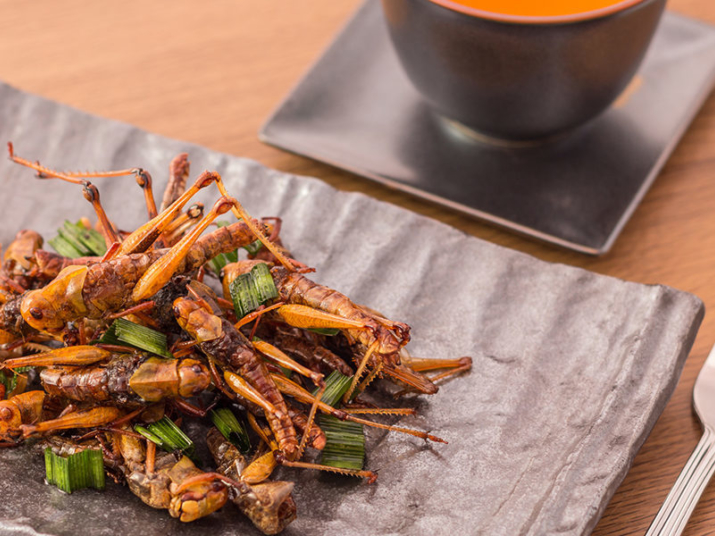 Will we soon be eating cricket crackers and bug burgers? The amendment to the EU Regulation on Novel Foods, which becomes binding for all member states on 1 January 2018, makes this at least more likely.

The first scene of the latest Blade Runner film is set on an insect farm. In the middle of an ochre-coloured desert, in greenhouse-like tents, worms are being bred. In 2049, according to the vision projected by this film, the breeding and processing of insects will be a normal part of everyday life. But are we really on our way to a future in which the consumption of insects will become normality? From the administrative standpoint at least, the amendment to an EU Regulation has now cleared the way for insect-based foods.

Under the Regulation, novel food is defined as any kind of food that has not been consumed to a significant degree in the EU prior to 15 May 1997. All foods and food ingredients falling within this definition require testing in order to establish that they pose no danger to health. One example of a “novel food” that had to undergo an approval procedure is chia seeds.

In its old version the Regulation refered to “foods […] and food ingredients isolated from animals”, which made it unclear on whether it and its approval procedure should apply to insects. This left open the question of how to proceed in cases involving entire animals – and insects are often processed in their entirety. As a result, individual EU member states interpreted this aspect of the Regulation differently. As of 1 January 2018, the new version of the Regulation on Novel Food – which has actually been in force since 2015 – will become binding in all EU member states. The amended Regulation unambiguously refers to “entire insects”, thus making it clear that they are covered by the Regulation and capable of being approved within its meaning.

In addition, the new Regulation will also facilitate the introduction of certain foods onto the market. If it can be proven that they have been regularly consumed by a large quantity of people from other cultural spheres for a period of more than 25 years, their admission to the European Union’s market may be sped up. Foods produced from insects could also benefit from this rule.

Insects are normal ingredients in the local cuisines of many non-EU countries. Around the globe, two billion people eat insects every day. According to data provided by the FAO, the Food and Agriculture Organization of the United Nations, more than 1,900 species of insects are regarded as edible. The most commonly consumed insects are beetles (31 per cent), caterpillars (18 per cent) and bees, as well as wasps and ants (14 per cent). Grass hoppers, locusts and crickets are also served up quite frequently for human consumption. In some countries, even dragonflies are part of the cuisine. By the way, in Europe too there was a time when maybugs were a normal dish.

Insects have both nutritional and ecological advantages. They contain many vitamins, minerals and unsaturated fatty acids. When breeding insects, the ratio between yield and the amount of feed required is highly efficient. Crickets, for example, need 12 times less feed than cattle to produce the same amount of protein. In addition, the breeding of insects requires less water than is the case with poultry and animals fattened for slaughter, and also produces significantly smaller CO2 emissions. Also, the breeding of insects does not require the clearing of large wooded areas, and insects are well suited to be used as feed for other animals. According to a study by the WWF, the degree to which the breeding of insects is environmentally friendly depends on the insect species and the type of feed it requires.

A few startups in the field of insect cuisine have already got off the ground in Europe. The “Bugfoundation”, for instance, is an enterprise established by two young entrepreneurs from the German city of Osnabrück. It has launched its first restaurants in Belgium and the Netherlands, offering Bux Burgers that are made from the larvae of the buffalo beetle. Since 2017, the company has also sold its products in Swiss supermarkets. As soon as it receives its sales permit, the “Bugfoundation” will also sell its insect-based foods in Germany. Another provider of insect snacks and other insect-based products from European producers is the online shop “21 Bites”.

“The proof of the pudding is in the eating,” says Mirko Winkelmann, whose work at the Futurium is focussed, among other topics, on nutrition. “Twenty years ago, no one in Germany could imagine it was possible to eat raw fish. Today, you can buy sushi in every supermarket. Whether things will develop similarly with insects remains to be seen. However, one thing is clear: our current food system is highly problematic in many regards and we must start thinking about alternatives.”

The future will show if Blade Runner’s vision was right and whether, now that the administrative hurdles have been lowered, bug burgers and cricket crackers will establish themselves on European plates.