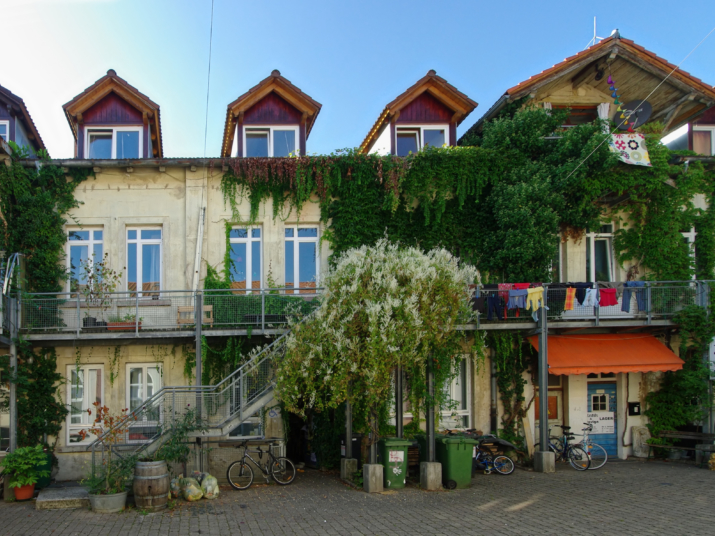 “GIVE THE HOUSES TO THOSE WHO LIVE IN THEM!”

Affordable and self-managed living space is scarce in many parts of Germany, especially in its major cities. With the so-called Tenement Syndicate model of housing – living in a self-organised fashion and operating collectively – tenement houses are permanently withdrawn from a market dominated by speculators.

“The development of rental and property prices in the major cities has revealed the effects of unchecked land speculation and the failure of previous housing and land policies. For example, land prices in Munich have risen by 34,000 percent since the 1950s. [1] Together with the privatisation wave of the 1990s, the failure of many municipalities to build much in the way of low-rent public housing, and the slow disappearance of social rent control, this has led to a catastrophic situation, especially for people with medium to low incomes.” This is how the non-commercial investment company Mietshäuser Syndikat summarises the current housing problem. As a cooperative association for multi-occupancy building projects across Germany, Mietshäuser Syndikat points the way towards an alternative path by supporting groups in transferring real estate into common ownership and managing it autonomously.

In order to take a property out of the hands of potential speculators, it is acquired by a limited liability company (LLC) – a so-called “Haus-GmbH” – that is founded specifically for each tenement project. This company has precisely two shareholders: one of them is the tenement house association (Haus-Verein), which is made up of the residents of the multiple-occupancy building. The latter manage the tenement house autonomously and are responsible for everything from searching for tenants to organising the necessary renovations. The other shareholder is Mietshäuser Syndikat – the association that is organised according to bottom-up processes of democratic decision-making and which oversees all similar existing tenement projects within its domain. As a guardian organisation, it has the right to vote on all issues concerning the property’s entry in the land register. This ensures that the property always remains in collective ownership.

The residents need neither equity nor deposits, since the purchase of the property is financed by a combination of bank and direct loans. Over time, these loans are then repaid using the rental income. A small portion of the rents also goes into the solidarity fund of Mietshäuser Syndikat. As soon as the loans and interest have been repaid, a large part of the rental income then proceeds to flow into the solidarity fund. This money is used in turn to finance the deposits required for the share capital of all tenement house LLCs and also to provide start-up funding for new tenement projects.

The model originated in the squatter scene of the 1980s in the southern German city of Freiburg. In the meantime, the association has grown to include 144 such tenement projects. In the 65-minute film “Das ist unser Haus” (“This is our house”), the organisers of the cooperative association explain in detail how the Mietshäuser Syndikat model works.