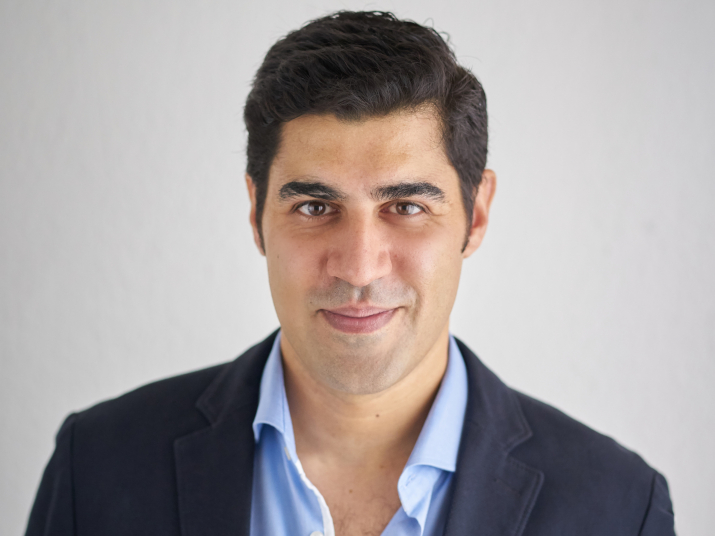 Parag Khanna: The Melting Pot is Our Destiny

By 2050, half the world’s population will be living nomadically. This is the proposition made by political scientist Parag Khanna in his book “Move – The Forces Uprooting Us”. The reasons for this mass migration are manifold: climate change, political unrest, demographic imbalances and economic displacement are all accelerating mobility. Khanna spoke to Futurium online editor Ludmilla Ostermann about the need for mobility in a world full of borders.

In Move - The Forces Uprooting Us, Parag Khanna brings together history, politics, and the natural living conditions of humans, which are currently undergoing rapid change, and derives predictions for the future from them. This Saturday, September 18, at 6:00 pm, the author will personally present the book at Futurium. You can get your ticket for the event here.

You were born in India, you’ve lived and worked in Dubai, Germany, England and the USA, and you’re currently based in Singapore. Where will you be living 30 years from now? And why?

Parag Khanna: More and more people will be in a constant state of movement. We’ll be shuttling between climatically stable locations. As it happens, I’m planning to retire to Berlin, actually. But I also believe strongly that Singapore has quite a future ahead of it. It’s an island threatened by climate change, but at the same time it’s also a climate oasis. They’ve got adequate resources available to protect the city against rising sea levels and the other effects of climate change. Somehow, I suspect I’ll always be moving along the Silk Road, with Europe at one end and Singapore at the other. I have Singaporean citizenship, but I feel European at the same time. Part-time European and part-time Singaporean, you could say!

Hungary, Poland, Turkey, Russia – many countries counter their inhabitants’ dissatisfaction with the consequences of globalisation with the promise of protection and security in the nation state. What future do these political models have in a world where, according to your prediction, half the population will be leading a nomadic life by 2050?

Khanna: The concept of the nation state is compatible with mass migration. The 19th and 20th centuries were simultaneously ages of mass migration and nation states. These concepts are not mutually exclusive. Because, in fact, it’s precisely those states that act nationalistically that are the ones that generate migrants. They’re the states that their own inhabitants don’t want to stay in. That’s the great paradox of nationalism. The urge to move has always overcome nationalism. Otherwise, we’d have ethnically pure nation states. But that’s not the case. We have states that are demographically and ethnographically diluted. By definition, there are only very few nation states in the world: China, Japan, Bangladesh are among them. In political science, a nation state is defined as having a population that consists of a single dominating ethnic group that makes up 90 per cent of the entire population. Even though we’re still guided by the concept of the nation state, reality has long since made this definition obsolete.

Despite Donald Trump’s presidency, the U.S. has become even more diverse.

In 1990, there were twelve countries in the world with border walls; today, according to sociologist Steffen Mau, there are as many as 70. On top of that, there are so-called smart borders that, for example, control immigration at airports. In such circumstances, how is mass migration going to be possible?

Khanna: The second half of the 20th century saw the largest increase in borders in history. The number of countries on the world map tripled in this period. At the time the United Nations was founded there were 51 states; today, the UN’s got 200 members. At the time of its founding, however, there had never been so many people crossing borders. The more states and identities that people have at their disposal, the more possible destinations migrants have for travelling and emigration. The argument that migration can be hindered by fences cancels itself out. In the U.S., the individual states have become even more diverse over the last five to ten years. More and more Americans identify as multi-ethnic because the rate of interethnic marriages has increased rapidly. Despite Donald Trump’s presidency, the U.S. has become even more diverse. It’s the best proof that borders don’t hinder anyone.

If that’s the case, do borders have any future at all?

Khanna: As a political scientist, I’ve written and hypothesised a lot about this topic – and about the fact that the number of nation states is subject to cyclical fluctuation. In the age of imperialism, there were only a few empires, which then proceeded to disintegrate into the 200 states that exist today. We’re currently at a point where states are once again coming together to form federal units, such as the European Union. There are similar ambitions in Africa and Asia. However, it’s not that member states’ physical borders simply melt away, it’s more that the latter’s functions disappear. This is a significantly more important process than erecting a fence on the Bulgarian-Turkish border. I’m all for borders and statehood and the self-determination that comes with it. I believe that the more borders we have, the more peace we’ll have in the world. Because borders will enable us to solve border conflicts. There will still be tensions, but fewer border conflicts.

How will mass migration affect the relationship between rich and poor? Is there likely to be an equitable process?

Khanna: If we really wanted to make an effort to help the poorer people in the Global South, we’d let them migrate. That is absolutely the best solution for balancing out different human living conditions. There’s habitable territory available in the northern hemisphere. But most humans still live in increasingly uninhabitable areas such as Africa, Southeast Asia or Latin America. These unequal conditions could immediately be balanced out by placing no barriers on migration. However, we’re doing everything we possibly can to avoid this, of course. We’re afraid of losing our sovereignty. We express this sovereignty by controlling people at borders. A pandemic, computer hacks, air pollution, drug trafficking – all these things cannot be controlled. But people can.

The goal is to save our species.

In your book, you’re on the lookout for new habitats worth living in – places that will become habitable on account of climate change. Kazakhstan – currently a country of 20 million inhabitants – could become home to 80 million people. Where can we find other such regions for the future?

Khanna: Other future regions include parts of Canada, Russia, Japan or Scandinavia. There are certain criteria that define liveable regions of the future: climatic conditions, infrastructure, the political situation and economic opportunities. The places where you and I are currently living (Singapore and Berlin) fulfil these conditions at the moment. But Kazakhstan is a country that attracts immigrants too. Of all the former Soviet states, Kazakhstan is the only one whose population has been growing through immigration. It’s proof of the stability of the state and the foresight of the government, but also of its openness to immigration.

What is the psychosocial dimension of mass migration?

Khanna: Despite all the bad news, we’re standing on fertile ground for the sprouting of a new cosmopolitan utilitarianism that has everyone’s well-being in mind. We’re starting to become aware that the human species is limited in its potential numbers. There are only eight billion of us, and we’ll be reaching our peak number over the next ten years, before population goes into rapid decline. We no longer need to fear a flood of immigrants. The goal is to save our species. That’s a glaring turning point for the way we think. Like many other living beings, humans are a nomadic species. Humans were on the move for 95,000 of the past 100,000 years. And we can become so again. The tools we have at our disposal today can save us from the consequences of climate change. We’re well on our way anyway: for the last 1,000 years, more and more humans have been falling into the melting pot, if that’s what you want to call it. That’s our destiny. We see it in the major cities of the world – in New York, London, Dubai, Singapore, Los Angeles, Hong Kong, but also Berlin. Mobility is woven into the great arc of human development and evolution.