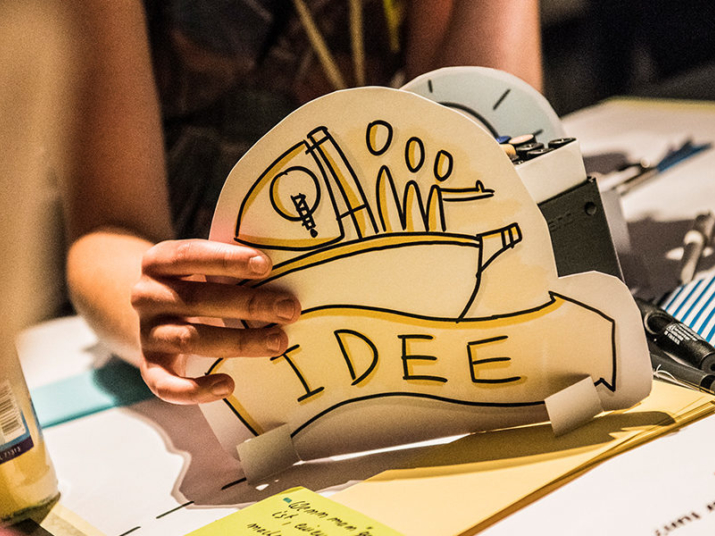 During the Workshop Weeks, participants of the exhibit workshop for the Robot Theatre had laid the groundwork for the future exhibit. Now their ideas were taken further by the participants of two follow-up workshops.

“We have ideas for robot stories,” wrote a participating father-son team in their application for one of our exhibit workshops: just what we were looking for. The first workshops were held at Futurium during the Workshop Weeks in June. They collected ideas for future exhibits – among others for the Robot Theatre, which will be part of the permanent exhibition.

The first workshop laid the foundations: many different characteristics were collected for the three robot types, and fantastic prototypes were built – in some cases more than one per type. The second workshop in August developed the robots’ characteristics, making them more specific. By the third workshop, participants had already begun writing dialogue for the robots, based on a sample scenario. “The idea was that the robots believe they are dealing with Martians when a group of visitors stand in front of the exhibit,” explains Giulia Paparo, Education and Participation Consultant at Futurium. “Then each robot reacts in its own specific way, but does not discover that it is dealing with humans from the future until the very last minute.”

The three robot types are the thinker, the cuddler and the worker.

The three robot types are the thinker, the cuddler and the worker. The participants have even named them now: Ratio, Emotio and Praktiko. Since the very first workshop, priorities have been to keep the robots gender-neutral, and their shapes practical and abstract. For example, the participants imagined Ratio as a kind of “thinking tube”, with an antenna to receive flashes of inspiration. It makes a slight ticking noise and is entirely devoid of empathy. “In the scenario described above, its initial reaction would be to measure the carbon content of the creatures in front of it,” recounts Paparo.

The ideas and groundwork developed by the participants are now being honed – among others by puppeteer Steffi Lampe and dramatic adviser Wolf-Dieter Gööck. Both played a key role in the workshops. “We have to integrate the ideas from the workshops with the scientific findings on future robot development,” explains Gabi Zipf, Head of Exhibitions, “and assess their technical feasibility.” That is where the exhibit builder, a fairground ride maker, comes into play. Yes, you read that right: the people who build carousels and roller coasters. “Well, the whole thing has to run all the time. We need it to be extremely sturdy. We can’t have the exhibit failing all the time, as often happens with displays. And those ghost trains are amazingly reliable,” grins Zipf.

The exhibit workshops are one of the Futurium’s participative projects, which involve visitors in the centre’s work – an approach that will remain an important part of the institution’s approach in future. “The workshops were very focused and productive,” recalls Giulia Paparo. “The participants communicated and worked very well with one another, producing some great results. There were some ideas we would never have thought of ourselves.” That is one reason why some of the robots have undergone interesting transformations. While the discussion on the cuddler in the very first workshop revolved around whether it should have tentacles or not, by the third workshop, it had become a sensitive flying sphere. Which is one example for the necessity of a feasibility study. When the ideas of the workshop participants, the scientific findings, the work of the Futurium team, the dramatic adviser and puppeteer, as well as the manufacturer’s technical expertise finally come together, the end result will certainly hold a surprise or two in the exhibition!