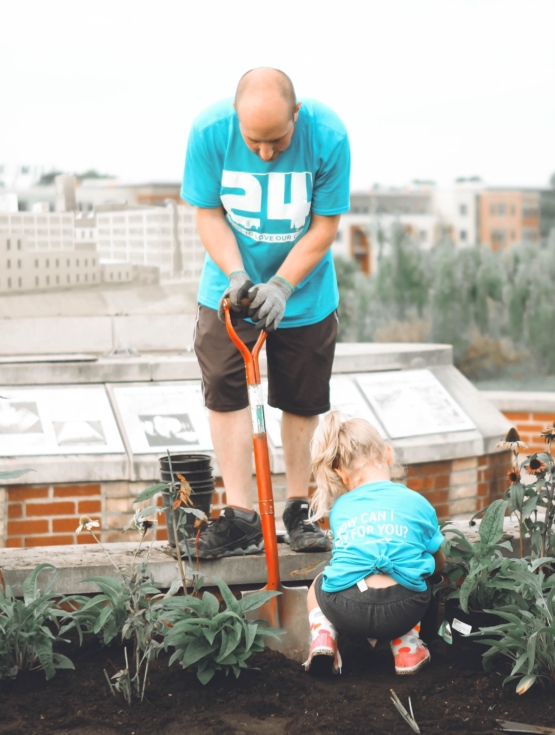 PLOUGHING THE FIELDS BETWEEN BLOCKS OF FLATS

Fresh, local, social: how can urban agriculture work? In “The Power of Just Doing Stuff”, Rob Hopkins, the founder of the Transition movement, gives answers.

The British lecturer and environmental activist launched his environmental movement in 2006. It brings together people who are committed to shaping a future that will be good for everyone’s grandchildren. And this is what it looks like: we’ll be living in towns and villages in which we‘ll be able, for the most part, to feed ourselves on local produce and earn our living locally. This way of life will make us “resilient”, that is, less dependent on an external energy supply and the industrial production of goods. “As a culture, we are currently moving in a direction that puts the desires of the present above the needs of the future. Unwaveringly, we are passing on our waste, debts and our climate chaos – all consequences of actions oriented towards short-term interests – to future generations.” [1] The movement’s “founding capital” is the southern English town of Totnes, which in 2006 became the first place to declare itself a “Transition Town”. Transition means change and transformation. However, the members of the Transition movement don’t want a loud revolution. Rather, they want to prove that in everyday life it’s possible – and even fun – to snub globalisation and lead a plastic-free local life.

For 13 years, the ancient town of Totnes with its 8,000 inhabitants has been putting this new way of thinking to the test. What started as a utopian idea has turned into a living experiment with imitators around the globe. In the meantime, there have been more than 2,000 Transition initiatives in 50 countries. In Germany, for example, the Berlin borough of Friedrichshain-Kreuzberg and the city of Bielefeld have been campaigning since 2008/9 for a rethinking of urban life. Renewable energy supply, bartering among neighbours and the cultivation of food locally form the basis of communal life. Totnes has even issued its own currency, the Totnes Pound, which residents can use to pay for things in the town. In “reskilling" workshops, traditional handicraft and craftsmanship are seeing a revival. Neighbourly cooperation is the basic principle of the Transition movement. Groups of six to seven households per street get together to jointly implement measures for making their everyday lives sustainable. Currently, about a dozen official project coordinators are in charge of the various projects that volunteers take part in. [2] In 2011, only a few years after its foundation, the movement had already secured the participation of 468 households and more than 1,100 city residents. [3]

In these times of a globalised food industry, in which – at least in the western industrialised nations – customers expect a full product range in supermarkets all year round, the Transition Towns are relying on local and seasonal goods. These are produced in rooftop, backyard and community gardens, where in many cases people are allowed to help themselves to as many vegetables and herbs as they need. A self-sufficient food supply for the town of Totnes has, however, not yet been achieved. But with the organisation of food festivals, the weekly “Grown in Totnes” market and the cooperation with bakers, restaurants and farmers from the region, the Transition network is growing steadily.

One of the challenges for urban cultivation is the limited availability of land. That’s why the citizens of Totnes also rely on the principle of give and take: “I’ll give my time and effort in exchange for access to your garden.” Those who don’t own a garden, ask their neighbours to allow them to cultivate their unused patches of green. Another important prerequisite for making Transition Towns function is working together with officialdom. In Totnes, for example, the local council makes sure that urban green spaces are available for the project. The basic principle of urban agriculture is permaculture. Crop rotations and the “proximity” of vegetable varieties are coordinated, while farm animals such as chickens and pigs play an important role in pest control and manuring. Human intervention in natural cycles is kept to the minimum, and natural ecosystems are preserved as far as is possible.

But how realistic is it to implement a self-sufficient lifestyle, such as that aspired to in Totnes, on a global scale? The principles of the Transition Towns – from bartering to reskilling – are not new, but can also be understood as a return to “the days of old ” and their modern interpretation.

The Food and Agriculture Organization of the United Nations (FAO) has advised developing countries to expand urban agriculture in their megacities, for instance in Dhaka, Delhi or Lagos. It has been proven that growing your own food helps fight hunger and crime because it involves people in a communal task, lets them discover a new sense of community and enables them to create green retreats for themselves. [4] One problem that frequently arises in this context, however, is that the resulting crops are often polluted because they’ve been grown along major transport routes or next to industrial plants. And where there’s no public funding, the road to new urban agriculture projects is often rocky. The “Himmelsbeet” (“Heaven’s Patch”) project in Berlin-Wedding, for example, was privately launched in 2012, but has been constantly struggling to survive since 2015. Interest in community gardening exists, but what’s lacking is the necessary land. [5] In Tokyo, by contrast, agriculture continues to be carried out successfully in the middle of the world’s most populous metropolis with its 35 million inhabitants. City farmers have defended their fields against urbanisation for centuries. Today, the green oases in the Nerima district are considered showcase projects of the city. In addition to its bountiful harvests, which are sold in local supermarkets, Tokyo’s urban agriculture looks like turning into a promising new tourist attraction.[6] Another flagship project is the “Food Partnership” in the city of Brighton. Since 2003, the southern English city has been promoting a food system that caters to social justice and relies on local garden projects. The aim is to provide all inhabitants of the city with healthy, fresh and environmentally friendly food. [7]

The global view of urban agriculture shows that it’s diverse and faced with very different challenges. Rob Hopkins, the founder of the Transition Movement, is nevertheless convinced that when you start a project, it’s always small and you don’t think it could change the world, but it has a power behind it that shouldn’t be ignored.[8]