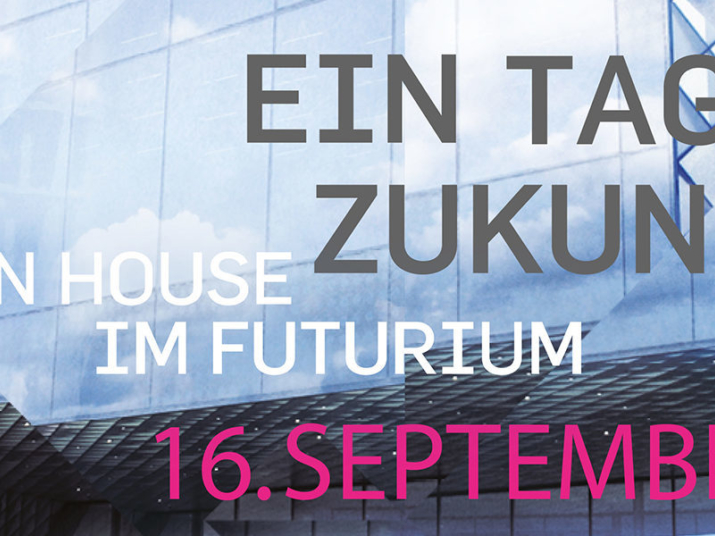 A Day in The Future. Open House at Futurium

Our building is finally complete and that is grounds for celebration. For one day, we will open our new house for visitors and fill it with science, music, film, art and robots.

Our building is finally complete and that is grounds for celebration. For one day, we will open our new house for visitors and fill it with science, music, film, art and robots.

Outside the building, visitors will be greeted straight away by the urban dance company Flying Steps Academy, who will interpret the themes „urban living“, „the world of robots“ and „nature“ in their performances. In the entrance hall, the virtual reality simulator Icaros will make it possible for everybody to soar through the air like a bird. There will be a number of panel talks and discussions with illustrious guests for the scientifically inclined with topics ranging from self-driving cars to the future of the oceans and progress in the realm of artificial intelligence. The opening statement will be delivered by Futurium’s director Stefan Brandt, followed by a keynote speech by former Executive Director of the United Nations Environment programme (UNEP) Klaus Töpfer.

ROBOTS UP CLOSE AND PERSONAL

Classics of the sci-fi genre, handpicked by the experts of the Deutsche Kinemathek, will be shown as part of a choice film programme. In the exhibition space, pepper the robot will explain scenarios of the future, if you tap it on the shoulder, for example. And on the same floor, Radialsystem V invites you to witness their performative musical interventions, presented throughout the day. In the robo lab at the basement, Peppers friends will be playing, fighting and communicating to the full extent of their robotic capabilities. But visitors will also have the opportunity to relax at the panoramic bar with a performace by artist and musician alva noto aka Carsten Nicolai before DJ Ipek will transform this space into a dancefloor at a later hour. The program is rounded off with a chill-out session starting in the early morning at 3 pm.

In cooperation with the Haus der kleinen Forscher there will be fun, games, handycraft and various entertaining ways to explore the future for the little ones.

For those who need sustenance for their explorations of the Futurium, food trucks in front of the building will provide culinary delights throughout the day.

ARCHITECTURE: GETTING TO KNOW THE BUILDING

In its current form, the building can only be viewed on 16th September. On this day, the architecture can still take centre stage, before the exhibition is installed at a later date. You can marvel at the exhibition space with its handcrafted dark grey concrete walls, the rooftop with its view reaching from the dome of the Reichstag to the church at Zoologischer Garten, the airy event space with its delicate wall décor and the so-called cave, inspired by Christopher Nolan’s batman films. All this and everything else the building has to offer, visitors will be able to discover personally through guided tours, led, for example, by our architects.

The talks will be held in German.

Download Program “A Day in The Future. Open House at Futurium” (in German)