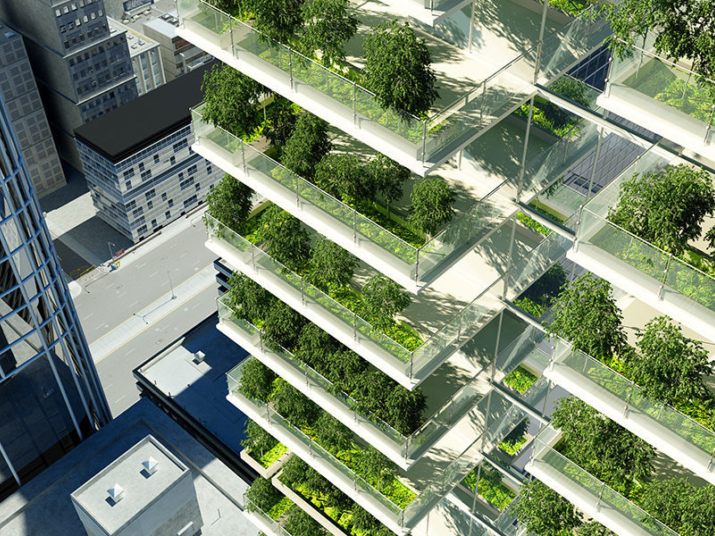 5 questions about … the future of cities for Rüdiger Haum

The world's population is growing rapidly and an increasing number of people is living in cities. We talked to Rüdiger Haum about how this will change city landscapes and which challenges we will face as a result.

BY 2050, THE WORLD’S POPULATION WILL REACH ABOUT 10 BILLION PEOPLE. HOW AND WHERE ARE THEY GOING TO LIVE?

The world is becoming increasingly urbanised. By 2050, two thirds of the global population, around 6.5 billion people, will live in cities. The largest shifts from rural to urban areas are happening in developing and newly industrialised countries in Asia and Africa. All that means a trend towards megacities. According to UN definition, those are cities with at least 10 million inhabitants. It is being estimated that by 2050 the largest megacities will be New York (24 million), Lagos (33 million) and Mumbai (42 million). In Europe, on the other hand, people will gravitate towards so-called metropolitan regions with core cities driving the regional economy and serving as political and cultural hubs.

WHAT CHALLENGES DO WE FACE BECAUSE OF THE PROCESS OF URBANISATION?

Should urbanisation predictions materialise, as many housing units and infrastructures would need to be built within the next three decades as have been built since the industrial revolution 250 years ago. In addition, large parts of various cities are in need of renewal. Right now, more than 850 million people live under inadequate housing conditions which lack even the most basic infrastructure. If we do nothing, an additional 1.5 billion people could be housed under inhumane living conditions by 2050.

Furthermore, if we don’t adjust the way we build, concrete manufacturing will continue to produce large quantities of carbon dioxide which drives climate change. In industrialised countries, additionally, a large part of the world’s greenhouse gas emissions is produced by heating and cooling systems in buildings as well as by urban transport.

ARE THERE SOLUTIONS THAT CAN HELP MAKE CITIES BOTH MORE SUSTAINABLE AND MORE LIVEABLE?

City planners and the construction sector are facing a mammoth task. But such challenges also spur innovation. Scientists work to develop sustainable and yet extremely robust types of concrete like carbon concrete. Prefabricated building modules will aid the construction of multi-storey structures even if they are made out of timber. Paris is about to realise plans to close down major avenues for traffic and instead to build more cycling lanes, pedestrian zones and to extend the electric tram network. And Singapore is subsidising the creation of green facades and rooftops.

WHAT WILL URBAN COMMUNITIES IN THE CITY OF THE FUTURE LOOK LIKE?

The process of digitalisation will greatly influence social interaction. Communication between people and citizen participation will shift to the digital sphere. Telepresence and 3D technologies will make it possible for us to “beam” ourselves over to friends, family and colleagues instead of calling them. Scientists call this the extension of our reality horizon. Nonetheless, the physical space of a city remains of great importance. It grounds us, it’s were we lead our everyday lives and where we encounter not only acquaintances but also strangers face to face. This will remain vital also in the future in order to preserve and strengthen tolerance, acceptance and solidarity.

WHAT CAN CITY DWELLERS DO TODAY TO MAKE THEIR SURROUNDINGS MORE LIVEABLE?

Just keep your eyes open for places that can be used creatively: like parking decks as parkour routes and for impromptu dance sessions, street parking spaces as chill out zones and roof tops for bee keeping. Those who want to achieve transformation on a larger scale can consult local architecture firms to get their conversion expertise, talk to the neighbourhood management about temporary uses or start internet crowdfunding campaigns. This way, whole skater parks, playgrounds made out of pallets or even cooperatively-run neighbourhoods have been built. These kinds of initiatives will definitely lay the groundwork for the city of the future.

For more information on this subject, come to our open house on 16th September, when we will host a panel discussion on this topic as part of our „One Day in the Future“ programme.