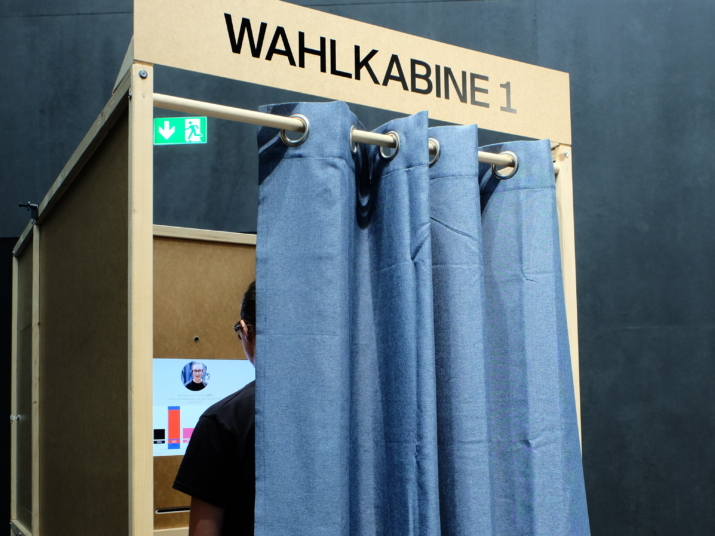 There’s an election coming up! Let’s head to the nearest polling station. Step into the voting booth, a quick smile, and we’re done… At least according to Smile to Vote. Pre-empting futurist scenarios, this art-meets-science research project takes political decisions off our hands: our vote automatically goes to the party we resemble the most. Does this sound scary and more than a little bit crazy? According to Smile to Vote’s Alexander Peterhaensel, this situation isn’t as unlikely or far off as we think. For convenience’s sake, we already let automated systems make more and more decisions on our behalf.

Behind the scenes, such technologies already govern a sizeable part of our everyday life. What’s your credit score? Who gets picked for a job interview? And who deserves early parole? Peterhaensel states that “multinationals already use Artificial Intelligence (AI) to analyse our behaviour and biometric data. They use it to assess our health, reliability, and psychological resilience, and even to analyse our voice patterns in job interviews.”

The necessary data is already out in the open. At home, Alexa, Google Home, and other systems listen in on our conversations; on social media, we share our private thoughts and habits; and CCTV cameras trace our movements in public spaces. All this data is freely available and can be analysed, often to extrapolate one trait from another. Among other applications, this is used to target advertising, for example, to people with fair skin who might need stronger sunscreen. More often than not, however, such systems analyse thousands of different characteristics, making it impossible for humans to figure out the connections between data points. Whether these connections even make sense (see: correlation vs. causation) remains obscure. We simply trust the AI to get it right.

Some of the biggest related technological advances are happening in image and face recognition. Take software-guided CCTV’s for example. They can identify almost any person with known biometric data, the kind of data we might even share voluntarily to unlock our smartphone or pay for lunch. Peterhaensel’s own project was inspired by similar initiatives: the Smile to Pay approach championed by Chinese tech giant Alibaba and a frightening study by US-based psychologist Michal Kosinski.

The latter claimed that algorithms could determine a person’s sexual orientation just by looking at their face. “I am appalled that proponents of psychometrics truly believe that such technology is a good idea. That is, using algorithms to extrapolate our character or future behaviour from the way we look,” states Peterhaensel. “After all, there’s a good reason why so-called phrenology, i. e. using the shape of a head to determine someone’s character and intelligence, was discredited as a pseudo-science back in the 20th century.”

The recent Cambridge Analytica scandal underscores the dangers of using and abusing data to influence politics. Building on this principle and Michal Kosinski’s dubious research, Smile to Vote takes our convenient reliance on AI to its logical extreme. If facial recognition works to determine someone’s sexuality, why not apply the same principle to political preferences? To determine the voter behaviour, Peterhaensel’s fake voting booth draws on an obvious data source: the pictures of politicians in the German parliament.

The technology behind it is relatively easy to assemble. “It’s not a rocket science. We simply set up a neural network and combine it with off-the-shelf facial recognition. In terms of methodology, we’re using the one devised by Kosinski and trained the system with 700 photos of German parliamentarians, classified by political affiliation. This allows the AI to learn visual patterns associated with each party. When you use Smile to Vote, you’re automatically measured and compared to these existing patterns. All of this happens below the human threshold of perception.”

So, let’s enter the voting booth. Once our face appears on the monitor, it takes the system just a few seconds to determine the ‘right’ party. Ah, I’m conservative? And my brother votes for the Green party? Hang on, is there any way to veto the system?

Should the results make our smiles slip, we’re in good company. After all, such an automated voting system could only work if we really wore our hearts on our sleeves and our political affiliations on our faces. Thankfully, this is not the case. Nonetheless, it’s all the more frightening that we willingly rely on similar algorithms in other areas of our lives. “This is just the beginning – Pandora’s Box has only just been opened,” adds Alexander Peterhaensel. “For some reason, it’s become okay and even hip again to discuss physiognomy and phrenology as long as you call it psychometrics. All dressed up with big data science and cool IT products.”

By taking this stark approach, Smile to Vote exposes our naïve faith in technology. The project’s website, the voting booth, the accompanying information video, and even the language and business card mirror the clichés of current science start-ups that promise to revolutionise the world. But it’s not just investors who are dazzled by the buzzwords such as big data, machine learning, disruptive technologies, Artificial Intelligence, and data mining.

Politics, media, and culture, too, are easily blinded by professional looking charts and figures. So, when Peterhaensel’s sleek marketing materials promise efficient processes and valuable insights into political trends and voting behaviour, some decision makers are only too eager to believe his offerings, while other people rightly warn of the dangers and criticise the Smile to Vote approach.

Artificial Intelligence has huge potential to change our society for better or worse. Like most new inventions, it comes with both risks and opportunities. Alexander Peterhaensel asks us to consider that “this technology, at least the way it is being designed and used today, could dissolve privacy and thus undermine the democratic process. It can also be used to shift the balance of power away from those who are already disadvantaged, as is happening in China. Paying for convenience with our personal freedom is never, ever a good idea. We really need to decide: Do we want to be controlled by algorithms? Or do we want to control the systems?”

This makes Smile to Vote a vital call for self-determination in both the digital realm and the actual world to ensure that our choices truly remain our own in the voting booth and beyond.